By Joseph BAMIDELE
LAGOS: Following the massive fire outbreak which occurred at its depot on Wednesday, the management of MRS petroleum have issued a release explaining the issues surrounding the incident, even as it claims investigations are on-going to ascertain the main cause of the disaster. 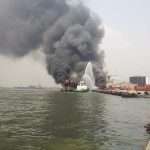 This is to inform the general public that on the 9th of January 2013 at about 1130hrs, one of our barges (S215) caught fire while docked at our jetty. The cause of the fire is yet to be determined, but investigation is ongoing.
We would like to assure the public that no life was lost, although minor injuries were reported by staff who were on duty at the time of the incident, while trying to contain the fire.
We thank our staff immensely for their professionalism in evacuating the premises in accordance with our HSE policy. This show of professionalism paved the way for the various Fire Service Teams to perform their duty and ensure that no life was lost.
We are most grateful to the Nigerian Ports Authority, particularly their fire departments (Land and Marine) for their prompt and professional conduct in containing the fire within the shortest possible time. We would also like to thank NIMASA, Federal Fire Service, DPR, Lagos State Fire Service and all other agencies who were there to support us.
In addition, we thank our colleagues in the industry namely Nigerian National Petroleum Corporation NNPC / PPMC, MOMAN, DAPPMA and JETPFON for their support in ensuring the fire was curtailed, as well as the general public for their rare show of support and prayers.
Our special thanks goes to the Governor of Lagos State, His Excellency, Babatunde Raji Fashola, who took time out of his busy schedule to visit the facility and sympathize with us at this difficult time.
In spite of the foregoing, we assure the general public that all steps are being taken to ensure that the terminal resumes normal operations within the shortest possible time, to ameliorate the current fuel scarcity being faced by the public.