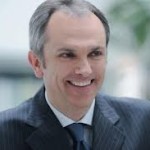 Xerox, which also said it was on track to meet its fourth-quarter forecast of adjusted earnings of 28 cents to 30 cents per share, said it had begun an external search for a new CFO.

Maestri will be with Xerox through the end of February to help manage the transition.

He joined Xerox as CFO in February 2011 after serving as CFO of Nokia Siemens Networks from 2008. He also worked with General Motors Corp.

Maestri took home $3.3 million as compensation for 2011, according to a regulatory filing.

He replaces Betsy Rafael who retired from Apple in October.

Xerox’s margins have been pressured due to investments in its services business that handles anything from toll systems to Medicare and brings in more than half its revenue.

The company said in October it would take restructuring charges as large companies tightened budgets and government had less funding for projects.