Image maker of the command, Mr. Steve Okonmah in a press statement made available to press men in Lagos today stated that the revenue figure shows an increase of N20,003,535,698.00 which is an equivalent of 39% increase over the figure generated in 2011. 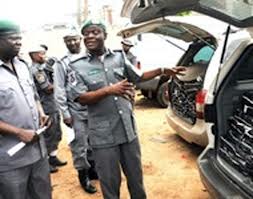 In the area of anti-smuggling, the command said that a total of 18 seizures were made throughout last year. “A breakdown shows that 8 of the containers were 40ft while 7 were 20ft containers. Also a total of 3 vehicles were seized” the document stated.

Okonmah further stated that the foregoing successes were recorded due to the regular meetings between the management of the command and the stakeholders operating in the area as well as the smooth and healthy relationship it maintained with the other sister agencies.

“The command had its share of ups and down, however, the leadership skills of the controller, Comptroller Zakari Jibrin and determination on the part of thr highly motivated officers steered the ship back on course”

While promising an improvement in the revenue drive of the command as well as its commitment to anti-smuggling activities, the Comptroller of the command, Mr. Jibrin warned that tough times awaits fraudulent importers in 2013.