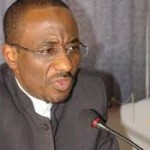 In another development, the CBN has  revoked the licenses of 236 Bureau de Change, BDC, operators due to non-payment of the mandatory deposit of $20,000.

The revocation was announced by the Director, Trade & Exchange Department, Batari Musa, in a statement entitled: “Revocation of Operating Licences of 236 BDCs.”

He said: “The licences of 236 BDCs have been revoked. Consequently, all authorized dealers/buyers and the general public is advised that with effect from January 14, 2013, any foreign exchange transaction, including sales to and purchases from these BDCs as well as transfer of funds through them and or on their behalf are illegal.”

On the other hand, interbank interest rate rose by over 100 basis points (bpts) due to delay in the release of the statutory allocation funds from FAAC.

Interbank operators had expected the funds to be released, yesterday. This coupled with outflow of liquidity for foreign exchange purchases and treasury bills purchases, caused scarcity of funds, and rise in interest rates.

Meanwhile, the value of equities listed on the Nigerian Stock Exchange, NSE, appreciated by N130.13 billion, yesterday, on the back of sustained investors patronage.

Specifically, the market capitalisation rose by 1.37 per cent to close at N9.62 trillion as against N9.49 trillion recorded in the previous day.

This was followed by the Conglomerates sector with 40.44 million shares traded in 201 deals while Consumer Goods sector recorded 34.13 million shares in 1,172 deals to close with third position on the chart.

The volume recorded in the sector was driven by transaction in the shares of United Bank of Africa Plc, UBA; Diamond Bank Plc, FBN Holding Plc, Fidelity Bank Plc and NEM Insurance Company Nigeria Plc. The total volume of 275.27 million shares valued at N2.09 billion traded in the five stocks accounted for 43.23 per cent of the entire market volume.