ABUJA:The National Assembly has pledged its support for the establishment of a national carrier.

The Deputy Senate President, Senator Ike Ekweremadu, stated this in Abuja today during the commissioning of the remodelled General Aviation Terminal (GAT) at the Nnamdi Azikiwe International Airport (NAIA), Abuja.

He said such an airline would restore Nigeria’s pride in the global aviation industry. 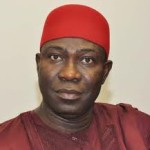 “I believe Nigeria and Nigerians will like to see an airline with Nigeria inscribed on it. I would like to encourage the minister to ensure that this happens during her tenure. Return Nigeria Airways or whatever name it is called to depict Nigeria as it (airline) flies all over the world just as we have Ethiopian Airlines, South African Airways, Kenya Airways, etc. I am sure Nigeria can do better than what it is doing now to ensure that we surpass these other airlines in the continent. This had happened before; we can have a national carrier,” he said.

On the new terminal which will handle all non-scheduled flights including charter, Ekweremadu urged the federal government to ensure that just as it has a convenient facility for high net worth individuals, it should ensure that other passengers using commercial aircraft benefit from similar infrastructure.

Later, the minister of aviation, Princess Stella Oduah, said the terminal was originally designed to serve as the airports cargo terminal but it was improvised to serve as domestic terminal.

“That was why services provided there did not measure up to acceptable international standards throughout the period it was used for domestic flight operations despite the renovation work that was carried out at the terminal to make it cope with the astronomical growth of domestic passenger traffic at the airport over the years,”

”For enhanced security, CCTV cameras have been installed at several points in the terminal, apart from X-ray scanning machines for the processing of passengers and cargo” she stated.