ABUJA: The Federal Airport Authority of Nigeria (FAAN) has began the evacuation of 60 aircraft scattered across the various airports in the country. 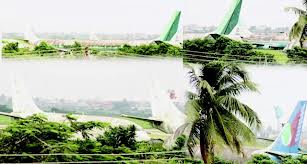 Retired Wing Commander of the Nigerian Air Force and Logistic Officer of AAYU
Steel Mills Mr. Bashir Haruna. Who spoke at the General Aviation Terminal (GAT) where 13 aircraft were abandoned,
said that they were dismantling the aircraft into
smaller parts which would be recircled in producing roofing sheets and other
house hold materials.

Mr. Haruna pointed out that the dismantled parts would be given to an aluminum company that would that take charge in the recircling process.

He said ”the dismantled parts have a lot of use in the small scale industries particularly
those ones that are in the aluminum company and it will be used in producing
roofing sheets, sliding doors and they can also be used as cyber cafe”

Asked how many aircraft that would be dismantled and evacuated, Mr. Haruna said ’’We are going to dismantle 13 aircraft in Lagos and it will take us about 13 days in
dismantling these aircraft which invariably is one per day’’