Ukraine has sealed a $10 billion (N1.57 trillion) shale gas deal with Royal Dutch Shell that will reduce its dependency on gas supplies from neighbouring Russia.

The deal, a production sharing agreement with Shell, who is also a major player in the Nigerian oil industry, is viewed as the biggest contract yet to tap shale gas in Europe and the largest single foreign investment in the former Soviet republic. 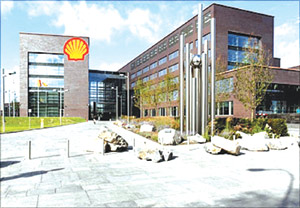 Reports say Shell has not publicly confirmed the deal, but the Ukrainian government, has however signed off on it on Wednesday as it pushes forward in a bid to end its reliance on costly Russian gas imports.

Ukraine chose Shell last May as a partner to develop the Yuzivska field in the east of the country and regional councils there approved the production-sharing deal last week, removing the last hurdle to signature.

Poland too is looking to tap shale to reduce its Russian gas imports, though a massive downward revision in its estimated reserves and a decision by U.S. major ExxonMobil to halt exploration have dashed initial hopes for Europe’s most ambitious shale exponent.
Production in Ukraine is several years off and will be dependent on results from 15 test wells.

But the Yuzivska shale gas field could be producing 20 billion cubic meters of gas in 2018, Stavitsky said on Thursday.

“We can only forecast at the moment. According to Shell’s optimistic scenario about 20 billion cubic meters could be extracted annually, according to the pessimistic, one at the very least 7-8 billion,” Stavitsky, quoted by Interfax, said in Davos.

If the top forecast were fulfilled, “this will completely solve the problem of the (gas) shortfall in Ukraine,” he said, referring to the amount of gas Ukraine has to import from Russia to meet its domestic requirements.

Under the 10-year deal signed in 2009 by the preceding government, Ukraine currently pays about $430 per 1,000 cubic meters for Russian gas.

The present Kiev government says the price is exorbitant yet has so far failed to persuade Russia to bring the price down. At the same time, Moscow has increasingly used the issue to step up pressure on Ukraine to join a post-Soviet Customs Union and step back from moves towards the European mainstream.