LAGOS – The Nigerian National Petroleum Corporation, NNPC, has recorded initial successes in the highly expected rehabilitation and upgrade of the 210, 000 barrels per day plants of the Port Harcourt Refinery Company (PHRC) with the fixing of the Nitrogen Plant that has been down for over one year.

However, the upbeat in the refinery operations is doused by the rising cases of vandalism on the crude supply and product evacuation conduits connected to the refinery, resulting in suboptimal capacity utilization. 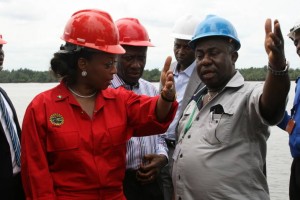 Checks revealed that maintenance work at the refinery has translated to significant production upside with total volume output of 17 million liters of different products per day.

Mr. Ugwu said the output from the refinery was contributing to the nation’s petroleum product supply pool as part of concerted efforts of NNPC business arms to guarantee availability of fuel for social and economic activities.

The refinery rehabilitation programme which is part of a comprehensive plan to improve local production of petroleum products aims to displace significant volumes of costly imported products, crash government’s subsidy bills and optimize capacity utilization in the domestic refining industry.

In a move to recover full nameplate capacity of the plant, Mr. Ugwu, disclosed that the management of PHRC activated processes to bring the critical units of the plant back into operation.

He said that the fixing of the Nitrogen Plant has paved way for maintenance and streaming of other vital sections of the refinery, including the Catalytic Reforming Unit (CRU) and Naphtha Hydro-treating unit (NHU).

With re-streaming of the three critical units, he explained, over 30 percent capacity would have been recovered to relaunch the entire refinery into full operation.

Mr. Ugwu stressed that the quantity of products from the Port Harcourt Refinery would increase by about 30 percent after the planned turn around maintenance (TAM) and rehabilitation in the year.

Minister of Petroleum Resources, Mrs. Diezani Allison-Madueke, had commissioned the Kalu Idika Kalu-led committee to conduct a capacity audit on the nation’s refineries after which she declared arrangements to recover the nameplate capacity of the plants.

The Group Executive Director, Refineries and Petrochemicals, NNPC, Engr. Tony Ogbuigwe, in his congratulatory message to Management and Staff of PHRC, commended them for their commitment to duty.

He assured them of necessary support in sustaining operations at the plant.

Managing Director of PHRC, Engr. Ian Udoh, also congratulated staff for being steadfast, focused and dedicated to duty in spite of daunting challenges.

He attributed the modest success achieved to the solid foundation and pragmatic planning put in place by his predecessor Engr. Tony Ogbuigwe, who is now the Group Executive Director Refineries and Petrochemicals.

He urged staff to sustain the tempo not withstanding the challenges crude supply disruptions due to the activities of crude oil thieves and vandals.

He noted that 199 incursions on the seven kilometer product line from Refinery to Okrika Jetty were recorded in 2012 alone, resulting in intermittent operations of the Refinery due to usage constraints.

He also pointed at other concerns over the pipeline breaks to include environmental pollution and degradation, huge economic loss and possible fire outbreak in contiguous local communities.

It will be recalled that such unwholesome acts have in the past led to the fire outbreaks that completely destroyed the Okrika jetty which has been recently reconstructed at huge cost and re-commissioned by the Honorable Minister of Petroleum Mrs.Diezani Alison-Madueke.

He said a combination of the challenges of incessant menace of crude oil line breaks and crude oil drought have often resulted in operations disruptions despite the readiness and availability of the refinery’s process units.

The menace of pipeline vandalism, he also pointed out, hindered evacuation of refined products from the refinery and risk exposures as communities encroach on the pipeline right of way, makes surveillance and policing difficult.

Based on the above, PHRC has recently embarked on massive enlightenment campaigns in its various host communities stressing on the dangers and effects of pipeline vandalism and product adulteration to health, safety, environment, machinery and the economy.

Mr. Ugwu declared that management of PHRC was passionately appealing to opinion leaders and government agencies to come to its aid in curbing the activities of vandals to enable it deliver on its mandate of ensuring optimal and sustainable production of refined petroleum products for the benefit of all Nigerians.