Nigeria Reps move to ban use of foreign currencies

…Says it’s wrong for dollars, others to be freely used in Nigeria

ABUJA —The House of Representatives, yesterday, moved to ban the use of foreign currencies in local and domestic transactions in Nigeria. This was sequel to a motion brought to the floor of the House by Hon Nadu Karibe, representing Bayelsa State. 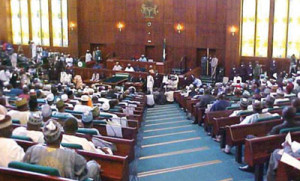 Karibe who led the debate had argued that “every country has its currency which serves as a means of exchange, a symbol of identity, a source of pride and a sign of independence and economic stability.”

He also observed that “without equivocation, the Naira is the only means of exchange for local and domestic transactions in Nigeria. There is a growing trend in the use of foreign currencies, especially the US Dollar for payments of school fees, hotel bills, real estate, rent and purchase in bars, night clubs, luxury good shops, in Nigeria.”

He further argued that “this trend has led to the high demand of these foreign currencies, especially the US Dollars in Nigeria.”
Speaker of the House, Hon Aminu Tambuwal at this juncture asked members to make their contributions.

In his contribution, Hon Warman Ogoriba said: “I was in South Africa where I wanted to pay my hotel bills in dollars and it was rejected. Honestly I was pleasantly surprised because here Nigerians freely use the dollar. I urge members to support the motion and the CBN to ban the use of foreign currencies in local transactions”.

Speaking in the same vein, Hon Buba Jibrin representing Kogi State said: “In my opinion this motion is very timely. In foreign lands we are made to change dollars into local currencies using our passport as an identification mark. But here in Nigeria even in our shopping malls dollars are freely used and that is wrong. It is only the high and mighty that spends Dollars the way they like.”

Speaking against the motion, Hon Aminu Sulayman said: “I see this motion as a glorified one as only inconsequential number of Nigerians use the dollar in Nigeria. This matter should be left for the appropriate authority to handle or the motion should be thrown out through the window.”
The Speaker, Aminu Tambuwal quickly pointed out to Sulayman that there was no window in the chamber.

Also in his contribution, Hon Ali Madaki representing Kano said: “If Nigeria is really serious and wants investors, we need to use Dollars. If we look at Dubai today Dollars are openly used and just in the 1970s they came here to borrow money from us. They wanted to borrow $10 million but the then Obasanjo administration was told the place was a desert but look at Dubai today, is it not better than Nigeria? We need investors to grow our economy.”
*House of Representatives members in session
Hon 0gbuefi Ozomgbachi, however, in his contribution said: “There is an existing Act of Parliament that forbids Nigerians from using foreign currency for marketing purposes.”

But while rounding up the debate, Hon Karibe said: “This motion is not against the sale of foreign currencies what it is against is its usage in local and domestic transactions in Nigeria.”

This attracted a loud ovation from members and when the Speaker put it to a voice vote it was unanimously adopted.”

Why Excess Crude is not designated in dollars — CBN

Meanwhile, the Central Bank of Nigeria, CBN, yesterday gave an insight into why the bank does not designate Excess Crude account in dollars, saying it was constrained by the country’s constitution.

Answering questions, yesterday, when he appeared before Senator Bassey Otu-led Senate Committee on Banking, Insurance and other Financial Institutions, CBN Deputy Governor, Suleiman Barau, said the apex bank was still discussing the matter internally to ensure a well advised position. Mr Barau who appeared before the committee to be screened for another term, disclosed that the bank was making efforts to ensure that the banks were strong enough to support the real sector for national development.

He also said that if the apex bank must perform effectively, it must be allowed to maintain its financial autonomy as against the proposed amendments to the CBN to subject its budget to the scrutiny of the National Assembly.

Barau argued that such autonomy was in line with the spirit of the law and international best practices, saying, “we believe that the National Assembly can make inputs in our budget through oversight. You can tell us what to do and what not to do.”
Responding to a question on interest rates, Barau stressed that the lending rates by banks were still high because of the adverse consequences that lower rates would cause to the rate of inflation at the moment.

On allegation that CBN does not patronize NSPMC for the printing of naira notes, he described it as untrue, adding that only a residual quantity of the 3.2 billion notes required by the CBN were printed by a foreign company.

He explained that the company made a total profit of N2 billion in 2012, just as he said that it was a matter of capacity and not patronage.

Earlier in his remarks, Senator Otu advised that if the banking sector must remain the backbone of economic development in the country, there was the need to get the CBN inject the necessary support, adding that the committee is saddled with the responsibility of screening the nominee for a second tenure as Deputy Governor in the apex bank.