The community, host to NPDC, which is operating OML 42, said its grouse was that the company not only neglected them, but failed to enter into a well spelt-out Memorandum of Understanding, MoU, with host communities and clean up their polluted environments. 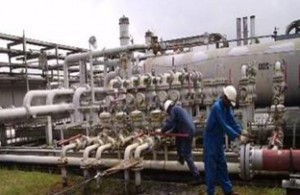 The community, in a statement by its Governing Council Chairman, Mr. Ako Samuel, said that it was joining forces with other aggrieved communities because of the “uncooperative and obnoxious attitude of NPDC by denying and marginalizing host communities.

“Since NPDC took over the asset of Shell Petroleum Development Company, for about two years now, there is nothing to show for its presence in our communities, rather, the communities are facing one form of oppression, intimidation or the other.

“On July 5, 2012, 200 barrels of crude oil were spilled into our environment due to equipment failure. Till date, NPDC has not bothered to contain or recover the spill, but bluntly refused to carry out clean-up, remediation or pay compensation to the impacted communities. All efforts to resolve this matter proved abortive.”

Describing as “a tragedy, the ruin of the ecosystem without them having a taste of the benefits arising therefrom,” the community demanded that “all contracts in OML 42 should be given to host communities’ contractors in line with the Local Content law.”