LAGOS – Chairman and Chief Executive Officer of Molap Group, Chief Isaac Jolampamo, has said that 80 per cent of indigenous shipping companies in the country have folded up as a result of illegal activities and the domination of the industry by foreigners despite the Cabotage law.

Jolapamo noted that these foreign companies, most of which are operating illegally have gradually succeeded in driving their local counter parts out of business. He explained that all his counterparts in the shipping business have their fleets depleted because they have been deprived of jobs for a long time. 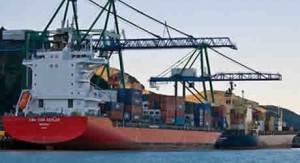 He pointed out that he had six vessels 10 years ago but that the number has since depleted to just one. He said the normal thing is for a vessel to do three or four jobs a month but noted that in the whole of last year, while one of his vessel did just two jobs through out last year, the other did six the same period.

He however cried out to security agencies in the country to save his only remaining vessel which is alleged to be involved in stealing of petroleum products from a stolen ship.

Jolapamo who is also the Chairman of Indigenous Ship owners Association of Nigeria (ISAN), said that a Lagos based firm had approached his company for the chartering of the vessel, and he obliged since he did not suspect any fowl play.

He said that the ship was supposed to sail to the Lagos off-shore where it was to load 15,000 metric tons of Automotive Gas Oil (AGO) for discharge at Lome.

According to him, “I managed to speak with the Captain of our vessel, M.V. Mor Prosperity on 21st of January, 2013 through the Turaya phone with the charterers super cargo onboard where the Captain informed me that the vessel did not find the mother vessel at the position given on her voyage instruction but instead of returning to Lagos anchorage, went further at the charterer’s instruction to another location to receive Dual Purpose Kerosene (DPK) cargo from a ship he could not tell me the name or International Maritime Organisation (IMO) Number etc, except that the name is written in Arabic before the phone went off at my barrage of questioning.”

Jolapamo further noted that he contacted both the Benin and Togo Republics Maritime Authority’s to help him locate the ship but that it was not until the 24th that one Mr. Jubril Rowaye of Brilla Energy contacted him “saying his DPK cargo onboard his widely reported missing vessel, M.T. Itiri has found its way to my vessel. This prompted our official request to Nigerian Maritime Administration and Safety Agency (NIMASA) and the Nigeria Navy for assistance to locate our vessel.”

He said it took the combine efforts of both bodies and the Nigeria Airforce for the missing ship to be located back in Lagos where it was abandoned deep off-shore Escravos after extensive wilful damage to it and the equipment in it to make it appear like a pirate attack.