ABUJA – The Nigerian National Petroleum Corporation, NNPC, has debunked claims by the Chairman of the House Committee on Finance, Abdulmumin Jibrin, that it owes the Federal Government the sum of N142.7bn in unremitted internally generated revenues, explaining that it has not made any profit in its operations since 2009 from which it should pay 80% into the Consolidated Revenue Fund of the Federal Government as mandated by the Fiscal Responsibility Act. 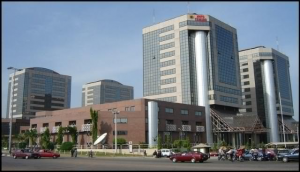 The Group Managing Director of the Corporation, Andrew Yakubu, made this clarification Tuesday at a press conference held at the NNPC Towers where he accused Jibrin of carrying out a smear campaign against the Corporation.

The GMD who who was represented by the General Manager, Media Relations, Dr. Omar Farouk Ibrahim explained that he had clarified the issue of internally generated revenue by the corporation before Jibrin and his Committee in early February when he stated that the NNPC was running at a loss as a result of operational constraints such as demurrage, price regulation of petroleum products, pipeline vandalism and crude oil theft.

“At that meeting, it was agreed that the Committee would get the Office of the Accountant General to raise a team along with some members of the Committee within seven days to look at the Corporation’s books and we promised to cooperate. It should be noted that one week after that meeting, no one visited us at the NNPC,” he explained, adding that the team that was eventually set up had met only once and was yet to conclude its work when Jibrin went to town with his phantom figures.

He explained that the figures that Jibrin relied on for his conclusion did not have the accounts of NNPC Corporate Headquarters where a bulk of the losses recorded by the Corporation reside factored into it and that the team was supposed to incorporate that into its report before the next meeting when Jibrin jumped the gun to announce figures that had not been reconciled.

He assured Nigerians that NNPC would continue to strive to live up to its mandate as contained in the Act establishing it.