How Nigeria can get out of economic crisis – IMF boss

ABUJA – MANAGING Director, International Monetary Fund, IMF, Christine Lagarde has asked Nigeria and Nigerians to brace up for harder times, following the massive fall in the price of oil globally, just as she said that the country since inception recorded the slowest pace of growth in the year 2015.

Lagarde, who called for increase in Value Added Tax, VAT, stressed that it has become imperative for the federal government to broaden the country’s tax base against the backdrop that Nigeria has the lowest VAT rate in the African continent. According to her, “the current VAT rate is among the lowest in the world and well below the rates in other ECOWAS members—so some increase should be considered.” 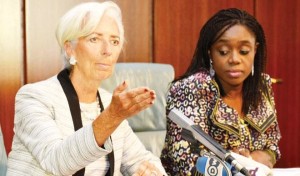 Although the IMF Managing Director was careful not to endorse the devaluation of naira against major international currencies, she, however, urged the federal government to adopt a flexible monetary policy that will better serve the interest of Nigerians.

Speaking, yesterday, at the National Assembly complex in Abuja during a meeting with Senate President Bukola Saraki and other senators, the IMF boss who called on the federal government to reduce cost of governance, said that the contentious fuel subsidy must be removed to allow government spend on infrastructure, housing, education, health, among others.

She, however, cautioned Nigeria against obtaining loans, noting that it was at the moment affecting the country and subsequent borrowing could hurt the nation’s economy in the long run.

She said: “On recurrent expenditure, efforts should be made to streamline the cost of government and improve efficiency of public service delivery across the federal and sub-national governments. Transfers and tax expenditures should also be addressed. For example, continuing the move already begun by the government in the 2016 budget to eliminate resources allocated to fuel subsidies would allow more targeted spending, including on innovative social programmes for the most needy.”

“The move by the government to remove fuel subsidy is good. Those people who need the subsidy can receive cash transfer. Fuel subsidies are hard to defend. Subsidies are no longer good. But I hear that it will hurt the poor. Forty per cent of fuel subsidies in rich countries go to rich families. The people do not really need the subsidy. Look at the number of people who stay in stations trying to buy fuel.

“There is a small acceleration expected in 2016. Growth in the last 10 years has slowed down in Sub-Saharan African countries. Oil prices will remain low and low for a long time. Oil producing countries must factor this in and model their economic policies towards this direction. Nigeria is facing mounting pressure. There will continue to be abundant supply of oil, but low demands. It is very unlikely that we will see any rise anytime soon.

“Private sector investments will be affected. Higher interest rate will continue to rise. Sub-Saharan African countries are facing immense pressure as a result of this. I can feel the hardship and pains as a result of activities of Boko Haram. The resources spent in trying to fight insurgency are supposed to be spent on infrastructure.

“Whatever happens in Nigeria will affect our neighbours because of the trading relationship. There must be a fundamental change in the way government operates. It is not about how to divide proceeds from oil wealth. It is about how to deliver to Nigerians the basic services they deserve. Hard decisions must be made. As the National Assembly considers the 2016 budget, these are the issues they consider.

“Moreover, the experience here in Nigeria of administering fuel subsidies suggests that it is time for a change—think of the regular accusations of corruption, and think of the many Nigerians who spend hours in queues trying to get gas (fuel) so that they can go about their everyday business.

“At the same time, we should not forget the huge challenges facing Nigeria’s state and local governments. These sub-national governments—which account for the bulk of social spending—have only limited tools to manage the impact of declining oil revenues. My message here is to manage better the smaller purse, while building capacity to increase internally generated revenue.”

Nigeria and West Africa
Lagarde then urged Nigeria as a country to build regional cooperation among West African countries because whatever affects Nigeria directly or indirectly affects other countries within the sub region. According to her, “This is always a moment I cherish. My first visit to Nigeria was in late 2011. At that time, Nigeria was emerging from the global economic crisis. Nigeria is the prime destination in Africa. Nigeria has gone through democratic transition which is a good thing. When investors know that transitions can happen successfully, they have more confidence.

“The richness of Nigeria has to do with the population. Nigeria is a huge market and people who are prepared to put their money here look at the population. Oil prices have fallen sharply. The geopolitical tensions have increased. These things are happening at a time the country needed to lift the standard of living of Nigerians. Nigerians are known for their courage and doggedness. Nigeria cannot waste time. There is no time at all.

“Government must step up revenue mobilization and reduce leakages. Every 50 kobo collected from 30 per cent of the country’s revenue goes into the servicing of local and foreign debts. The government must focus on power, transportation and housing. These three areas will create wealth.

They are critically important. Efforts should be made to reduce the cost of governance.

“As I am told, Nollywood currently employs over one million Nigerians. Poverty and inequality still remain high in many parts of the country. Mortality rate is still high.”

Speaking on the need to strengthen institutions of government empowered to tackle corruption-related issues, Ms Lagarde revealed that over $1 trillion was given and received as bribes globally every year. She equally revealed that corruption makes up five per cent of global Gross Domestic Product (GDP).

The IMF boss who urged the National Assembly to come up with laws that will address corruption and block leakages in the system, said: “Corruption is touted to be five per cent of the global GDP and over $1 trillion is said to be given as bribes globally every year. Today, Nigeria is looking ahead. The future is greater than the past in Nigeria. But the sooner the government delivers, the better it will be for Nigeria and Nigerians.”

Meanwhile, speaking earlier during a meeting with officials of the Central Bank of Nigeria (CBN) and chief executives of financial institutions in Abuja, Lagarde emphasized the need for the financial sector to support the real sector and also contribute to the growth and development of the Nigerian economy.

She said: “We had a productive meeting with representatives of the banking industry and we had the chance to discuss the stability and the sustainability of that particular sector. We also had the chance to debate together how the financial sector can better contribute to financing the economy and supporting the business and the development of growth in Nigeria.

“From my perspective, it was a very productive meeting, very open; we had the chance to really exchange and consider how the system can improve further.

“The financial sector of Nigeria is strong, solid and needs to continue to be so, but it also needs to lend to the real economy and to provide good terms of business.”

Also, Governor of the CBN, Mr. Godwin Emefiele, stated that banks in the country promised to increase their support of the real sector and also play a major role in Nigeria’s economic development.

He said: “On behalf of the people of Nigeria and the bankers, I would like to thank the IMF and Lagarde. We had very fruitful discussions and she gave support to the efforts of the CBN by also trying to encourage Nigerian banks to continue to support the real sector, support SME in Nigeria and indeed, also try as much as possible to boost lending at very concessionary pricing, just as we are doing.

“And the banks themselves have given their words that they would do their best to support, notwithstanding the risk as well as some of the challenges we had witnessed in the past.”

After the meeting at the CBN, Lagarde, who was accompanied by her husband, Xavier Giocanti, also visited Mother Theresa Children Home, Gwarimpa, Abuja, where she made a donation of $7,500, about N1.5 million, to the orphanage on behalf of the IMF.

Speaking at the orphanage, Lagarde congratulated the management of the orphanage for their efforts at caring for the children.
She said this was her second visit to Nigeria as IMF president, but nothing was as touching as whenever she visits orphanage of the likes of Mother Theresa Children Home.

She said: “This is my second visit to Nigeria as head of the IMF and on every occasion I have visited, presidents, governor of the CBN and legislators, but nothing is as touching as a visit like this one.

“And as you say, the future of Nigeria is bigger than its past. But the future is built investing in youth and education. And that future is built one child at a time; and that is what this orphanage demonstrates. No child is left behind and you care about those who are left by the society. And for that, I really want to thank you.