CHICAGO IL,-OPEC’s market-share war is inflicting more pain than the world’s top tier of oil producers have felt in at least 13 years.

Chevron Corp., the first super-major oil producer to report fourth-quarter results, posted its first loss since 2002 on Friday and said it’s bracing for a review of its credit rating. A glut of crude from the Persian Gulf and North American shale fields has collapsed prices, forcing the company to write down the value of its fields. Chevron’s results may presage a wave of writedowns next week as the other super-majors begin disclosing fourth-quarter results. Exxon Mobil Corp. and BP Plc report Feb. 2. 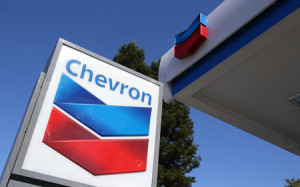 Chevron followed smaller rivals including Hess Corp. and Murphy Oil Corp. in registering deep losses this week as the Organization of Petroleum Exporting Countries’ effort to squeeze higher-cost shale explorers out of the market enters its 21st month. Despite the red ink, Chevron still plans to shell out $2 billion in dividends to shareholders in about six weeks to fulfill a promise to protect payouts at all costs.

“They are one of the few companies with the credit rating and the balance sheet to tolerate these prices for the short term and still pay a dividend,” Brian Youngberg, an analyst at Edward Jones & Co. in St. Louis, said in a telephone interview on Friday.

Chevron probably will cut spending on new projects for a fourth consecutive year in 2017 to as little as half the $41.9 billion it spent in 2013, the company said in a slide presentation published on its website. A decision on an expansion of the sprawling Tenghiz oil field in Kazahkstan is on hold, as is development of Chevron’s Buckskin and Moccasin discoveries in the U.S. Gulf of Mexico, Chief Executive Officer John Watsonsaid during a conference call with analysts on Friday.

The company expects that its debt profile will be reviewed by credit-rating agencies in coming months as scrutiny of the entire industry intensifies amid the worst oil-price crash in a generation, Chief Financial Officer Patricia Yarrington said during the call.

Chevron’s fourth-quarter net loss was $588 million, or 31 cents a share, compared with profit of $3.5 billion, or $1.85, a year earlier, the San Ramon, California-based company said in a statement. The per-share result was worse than any of the 22 analysts in a Bloomberg survey whose estimates ranged from gains of 29 cents to 63 cents.