LAGOS-FOLLOWING incessant multiple attacks on Oil and gas installations in Nigeria by the Niger-Delta Avengers which has brought the country’s oil production to below 1 million barrels a day, President Muhammadu Buhari has threatened to apprehend the perpetrators and their sponsors and bring them to book.

The President who actually proposed a carrot and stick approach stated that the federal government is ready and willing to engage elders and leaders from that region to address the issues, but will not succumb to pressure by the militants should they refuse to desist from their current spate of attacks on the economy of the country. 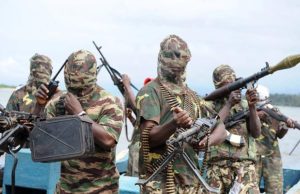 “On the Niger-Delta we are committed to implementing the United Nations environment programme report and are advancing clean-up operations. I believe the way forward is to take a sustainable approach to address the issues that affect the delta communities.

Re-engineering the amnesty programmes is an example of this. The recent spate of attacks by militants disrupting oil and power installations will not distract us from engaging leaders in the region in addressing Niger Delta problems. If the militants and vandals are testing our resolve, they are much mistaken. We shall apprehend the perpetrators and their sponsors and bring them to justice.”

The President assured the nation that policy measures and actions taken so far are not to be seen as some experiment in governance. “We are fully aware that those vested interests who have held Nigeria back for so long will not give up without a fight. They will sow divisions, sponsor vile press criticisms at home and abroad, incite the public in an effort to create chaos rather than relinquish the vice-like grip they have held on Nigeria.

The economic misfortune we are experiencing in the shape of very low oil prices has provided us with an opportunity to restructure our economy and diversify. We are in the process of promoting agriculture, livestocks, exploiting our solid mineral resources and expanding our industrial and manufacturing base. That way, we will import less and make the social investments necessary to allow us to produce a large and skilled workforce.”

President Buhari further assured that the Central bank of Nigeria will offer more fiscal incentives for business that prove capable of manufacturing products that are internationally competitive. According to him the government remains committed to reforming the regulatory framework, for investors by improving the ease of doing business in Nigeria.

“Meanwhile, the first steps along the path of self-sufficiency in rice, wheat and sugar – big users of our scarce foreign exchange – have been taken. The labour intensive farming enterprise (life), will boost the economy and ensure inclusive growth in long neglected communities. Special intervention funds through the bank of agriculture will provide targeted support.

Concerns remain about rising cost of foods such as maize, rice, millet, beans and gari. Farmers tell me that they are worried about the cost of fertilizers, pesticides and the absence of extension services. The federal and state governments are on the same page in tackling these hurdles in our efforts at increased food production and ultimately food security.” He enthused.