Oil no longer a determinant for Nigeria’s economic growth-DMO

LAGOS-THE fluctuations in global crude oil prices would no longer be a determinant for Nigeria’s economic growth if ongoing government policies are allowed to continue unhindered.
The to Director-General Debt Management Office (DMO), Dr. Abraham Nwankwo made this assertion recently even as he stated further that the naira and foreign exchange reserves will recover in the coming years as the impact of government’s economy diversification plan begins to crystalise in the economy. 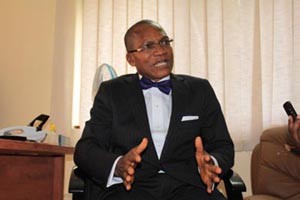 Speaking  at a Breakfast Meeting with Finance Correspondents Association of Nigeria (FICAN) in Lagos at the weekend, Dr. Nwankwo said governments’ efforts at revalitalising the agriculture sector, solid minerals, manufacturing and taxation will have massive impact on the economy in the next three to five years.

He said with government’s diversification project in full gear, Nigeria’s economic growth and development will no longer be determined by movement in the prices of crude oil.
He said a lot of revenues will be derived from taxation going, adding that the country’s low comparative tax revenue to Gross Domestic Product (GDP) ratio which stands at about seven per cent, against 18 per cent average in most developing countries,  would be improved on as the country begins to gain strength in production.
He said that by simply paying taxes by individuals and corporate bodies, government can secure the needed fund for major developmental projects.
“You can see that in the manufacturing sector, some factories are operating below capacity. But with the ongoing implementation of President Muhammadu Buhari policy on diversification of the economy and revatilising the  power infrastructure, the sector will pick up and create more jobs for the people,” he said.
Nwankwo said achieving self-sufficiency in power will enable government generate more income; companies will be able to pay more taxes, thereby helping government diversify its revenue bases.
“In the next five to seven years, solid minerals will be exported. It is possible that in the next five to seven years, the whole picture of Nigeria will be a complete turnaround because of government’s economy diversification plan. The difference between Nigerian and other countries facing similar economic challenges is that those countries do not have the same opportunities we have in Nigeria. Nigeria is near 100 per cent idle capacity, meaning the flexibility to grow the economy is high,” he said.
He urged Nigerians not to be depressed because of drop in crude oil prices. “We have no reason to be depressed just because crude oil price is down. We have to see the varieties of opportunities available for the country to grow the economy based on a well-diversified and sustainable manner. We as responsible stakeholders in the economy, should emphasise these opportunities,” he said.
“Indeed in other countries, the major source of revenue is taxation. Taxation should also be explored. Government should be able to sustain itself with taxation revenues. Now with the better tax compliance, and effective sanctions for defaulters, we have a room to boost public revenue from taxation,” Dr. Nwankwo stated.
The DMO boss said government has made significant progress in agriculture adding that in the next five to seven years, Nigeria would have reduced its reliance on imported foods, tackled unemployment and created huge jobs for the people because production is synonymous with job creation.
He said the 2016 budget focus is to address structural challenges in the economy while providing the enablement to create diversification and self-sufficiency growth.
“This is the first time that the budget specified that all borrowed funds will be for capital expenditure. The sharing of internal and international borrowing is almost 50/50. We have been borrowing locally, but we have to take advantage of the relatively low cost of funds externally. We do not want to borrow too much from the domestic economy, so that we do not crowd-out the domestic environment,” he said.
He said that given the challenges the economy is going through, much depends on what the media reports. “The media is critical, because what the media tells the international community will determine investment flows into the country. It is our responsibility to continue working hard to ensure the resilience our economy exhibited is sustained, until we achieve the turnaround that will come with diversification,” he said.
Nwankwo said the Nigeria economy is not supposed to be oil dependent given the level of natural resources abundant in the country. “We have to remind ourselves, that in the first instance, our economy was not supposed to be dependent on oil, yes, historically, oil revenues, has dominated our foreign exchange earnings up to 90 per cent and above, and public revenue about 70 per cent, but for many years, oil has contributed less than 20 per cent to the GDP,” he said.
He said the Manufacturing, Commerce emerging sectors like Entertainment, Music, Nollywood and ICT contribute over 80 per cent to the GDP and should be supported.
FICAN Chairman, Babajide Komolafe, praised the efforts being made by the DMO to support government’s diversification effort.
He said the role of DMO in economic development cannot be over emphasized, adding that FICAN will continue to support the DMO to achieve its goals within the economy.