ABUJA-Amidst trending rumours that he has gone on exile due to the high level multiple cases of corruption being leveled against members of his administration Former President Goodluck Jonathan on Wednesday returned to Nigeria  after  a month’s trip to the United Kingdom and Côte d’Ivoire.

It was gathered that the former President arrived at the Port Harcourt International Airport on Wednesday before heading for his country home in Otuoke, Bayelsa State where he arrived at about 9pm. 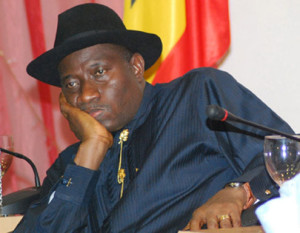 An associate of the former President, who pleaded anonymity, confirmed that Jonathan had arrived Nigeria.

He said, “I have spoken with the ex-President and he said that he had returned to the country.”

Jonathan had on May 23 dismissed a report that he was on exile in Cote d’Ivoire.

A report by national newspaper  had indicated that the former Nigerian President had been given asylum in that Francophone country because of the fear of arrest by the Economic and Financial Crimes Commission.

But on May 23 Jonathan had denied the report saying, “I’m not on exile.