House of Reps in disarray over N260bn NDDC budget

Yemie ADEOYE
ABUJA-THE House of Representatives committee on Niger Delta Development Commission, NDDC, have expressed disgust over the commission’s seeming decision to to sirte most of its projects in the constituency of the Committee Chairman Hon. Nicholas Mutu.
The comission’s Acting Managing Director, Mrs. Ibim Semenitari, had presented a 2016 budget based on a projected revenue of N260bn to the committee for approval. 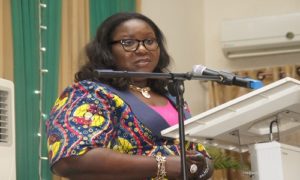 It was a session where Semenitari also complained that due to funding challenges, work had yet to start on 788 out of the 867 projects awarded in different sectors in the region.
“Different reasons could be adduced for this setback, but a possible reason may be that contractors are not too sure of payments as the commission has some financial challenges.
“However, 46 of the projects are ongoing, out of which 35 have been completed and commissioned,” the former Commissioner for Information in Rivers State, told the committee.
Semenitari stated that all the 2015 projects were “rolled over” to 2016.
She added that the 2015 projects brought the total stock of NDDC’s projects to “over 7,000.”
But, drama started when lawmakers picked quarrels that most projects were domiciled in Mutu’s Bomadi and Patani Constituency in Delta State.
They also criticised the crowding of projects in the Isoko Constituency  of the Minority Leader of the House, Mr. Leo Ogor, in Delta State,  to the exclusion of other communities.
One embittered member from Ugheli-West/North, Mr. Solomon Awhinawhin, pointedly accused Mutu of influencing the projects to his area.
He fumed, “We cannot pass this budget. I hope we are not saying that the budget will pass today? It is full of fraud.
“The Chairman has up to 90 per cent of the projects; the Minority Leader too has his own share of many projects.
“Ugheli-West/North produces the largest gas resources in the whole of Africa if not the entire world. There is no single project in this budget for them.
“Let me tell you, this neglect of Ugheli was why Niger Delta Avengers emerged. We are not passing the budget today because we have to represent all the communities in the Niger Delta adequately.”
Another member from Ondo State, Mr. Akinjo Victor, also protested that his Ileja area was not adequately captured in the N71bn voted for regional projects.
He observed that while projects were duplicated in other areas of the Niger Delta, his own community had no projects.
“There is so much duplication of projects, which makes the whole exercise fraudulent,” he stated.
Mutu kept mute and never addressed any of the allegations.
The Chairman, House Committee on Public Petitions, Mr. Uzoma Nkem-Abonta, cited a particular road in Abia State, where he alleged that it had been duplicated in the sum of N1.7bn.
“They did this road and the asphalt overlay; I have seen another N1.7bn, it is for the same portion on the same road by another contractor,”  Nkem-Abonta added.

However, Semenitari calmly explained to the angry lawmakers that there was no deliberate decision since he assumed office this year to sideline any community.
She noted that the alleged lopsided projects were actually inherited and that the commission had to keep funding them as rolled over projects.
For states like Ondo, Imo and Abia where members also raised complaints, the MD gave the assurance that efforts would be made to “streamline” some of the projects in a bid to spread them.
Giving the highlights of the budget, Semenitari said in 2016, the NDDC budgeted 231.2bn for capital development projects, down from the N271.4bn budgeted in 2015.
“The 2016 figure represents 89 per cent of the total revenue of N260.1bn. The commission has given priority to adequately providing for ongoing projects.”, she said.
On the recurrent component, Semenitari told lawmakers that the commission would spend N17.56bn on personnel cost, up from N16.13bn in 2015 to cover for staff promotions.
“Overhead for 2015 was N10.55bn. In 2016, we are proposing N9.98bn. The decrease by 3.6 per cent against 2015 is as a result of the commission’s resolve to efficiently manage its processes”, she informed lawmakers.
The committee later asked journalists to leave the venue so that members could discuss more freely with the NDDC’s officials.