ABUJA-THE Nigerian National Petroleum Corporation, NNPC is stepping up measures to ensure a successful operation in the ongoing search for crude oil in the Chad Basin and other parts of the Inland Sedimentary Basin even as President Muhammadu Buhari has ordered for deeper inquest into the prospectively of some hitherto neglected finds in some areas in the North Eastern part of Nigeria.
The Group Managing Director of the Corporation, Dr. Maikanti Baru made this disclosure on Monday while receiving the Governor of Bauchi State, Mallam Mohammed Abubakar who was on a courtesy visit to the NNPC Towers, Abuja.
Dr. Baru informed that the renewed search for hydrocarbon deposits in the Chad Basin would entail extensive probing of some allocated and non-allocated oil blocks in the region with a view to establishing the magnitude of the deposits. 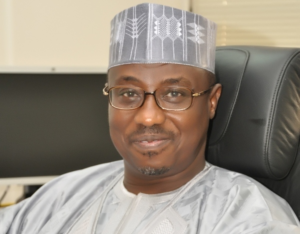 In his opening remarks, Mallam Abubakar said he is leading a delegation of Bauchi State government officials to the NNPC Towers to felicitate with the new GMD on his appointment noting that Bauchi State is proud of Baru and his accomplishments so far in the oil and gas industry.

Briefing the visiting governor on the intensification of crude oil search in the north, the NNPC GMD noted that the Corporation has identified specific oil blocks in the area where some of the finds have been made and would move to re-invigorate exploration based on fresh strategy.
“You know that very close home, we have exploration activities on the frontier basin in the Chad and some areas close to the Kolmani river where Shell had made  some indicative discovery of hydrocarbons and Mr. President has directed me to go into that area to reprove and further explore the magnitude and prospectivity of those finds . We are taking steps to re-strategize and get into those regions. We will re-invigorate the frontier exploration and see how they collaborate with NNPC that is holding Block A09 where some of the finds have been made and also Department for Petroleum Resources, DPR, for the other blocks that have not been assigned,’’ he said.
Baru implored the Bauchi State governor to collaborate with the Corporation in tackling the menace of pipeline vandalism especially in the wake of reported line breaks along the NNPC products supply line from Jos-Gombe-Bauchi enroute the Maiduguri depot.
Lending backing to Baru’s elevation to the position of GMD, Governor Abubakar stated that the government and people of the State will continue to support and pray for the GMD to ensure that his dreams for the NNPC come to fruition as he steer the ship of NNPC away from obviously turbulent waters amid tumbling crude oil prices. .
Also on Monday, the NNPC flagged off bid opening for the decommissioning and installation of towers and masts in Lagos, Benin and Port Harcourt area offices with eleven companies participating in the exercise.
Speaking during the bid opening ceremony at the NNPC Towers in Abuja, the Manager Telecoms, Engr. Michael Ejike said reputable telecommunication vendors with proven experience and capacity were invited to bid for the decommissioning and installation of towers and masts in some NNPC facilities to give it a facelift.
He noted that the eleven companies that submitted bid were required to bid for any of the four refineries of their interest adding that the exercise was geared towards providing equal opportunities for all bidders in a transparent manner.
On her part, the General Manager, Supply Chain Management, Mrs. Sophia Mbakwe said the result of the bid exercise would be ready in three weeks assuring that all prospective vendors would receive equal treatment.
Commenting on the exercise, the Executive Director of one of the bidding 0 companies, Mr. Anthony Wokocha, applauded the NNPC for the transparent conduct of the exercise and assured of the readiness of his company to deliver on the mandate if considered.