The snail farmers, based in Ota, Ogun, said that snail rearing could also create job opportunities for the youths.

Mrs Seun Ore, one of them, said that snail farming was becoming more popular, and as such, needed more government support.

He said, “We have not enjoyed government support like other areas such as aquaculture, crop and other livestock value chains, which have been supported.

“Snail farmers are left to raise their start-up capital, farm location and other requirements to raise the product, and that is presently hindering production.” 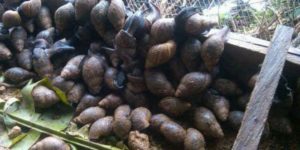 She urged the government to change the trend and encourage snail farmers, noting that the area had the potential to shore up the nation’s revenues and also engage youths positively.

Mr Matthew Olowu, another snail farmer, said that snail consumption was increasing globally, and more needed to be done to increase production.

Olowu said that there was also the need to regulate standard in the production of the meat commodity.

He said, “Since the country is keying into increased export of local commodities, we need to regulate and maintain standard in the production of snail meat.

“We have been talking about increased production.

“But, if a farmer is starting a snail business with N300,000, such a person would need more funds from government to expand his production.

“If you observe now, there is an increased consumption of snail meat globally. And that means we should utilise our comparative advantage in terms of coast lines.”

Olowu encouraged more farmers to take up snail farming because it was more profitable compared to most livestock production.

Another snail farmer, simply identified as Iya Mary, said that snail farming was expensive to start-up and as such, they needed all the support they could get.

The farmer said that the species were popularly recognised as West African Giant Snails, and could be reared in cages, pens and open areas.