LAGOS-THE Minister of Finance, Mrs Kemi Adeosun, on Friday called on G-24 countries to back Nigeria’s agitation for multinational corporations to pay fair share of taxes in the country.

Adeosun made the call while briefing journalists in Washington D.C on the outcome of a closed-door meeting of G-24 finance ministers and central bank governors meeting on the sidelines of the ongoing IMF/World Bank meeting. 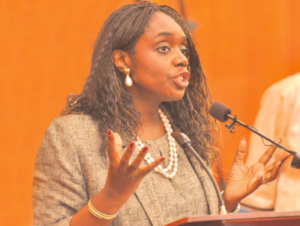 She said that Nigeria lost huge amount of money yearly due to tax evasion, mostly by multinational corporations who were infamous around the world for avoiding taxes.

She said that Nigeria had been clamouring for the companies to pay right and fair taxes, because it was determined to block revenue leakages and streamline it to develop infrastructure and create jobs.

“We were able to make two contributions; one of it was the need for accelerated investment in infrastructure as the way out of our current situation. This is what we believe will create jobs and reduce poverty.

“Another issue that we raised was tax evasion and the fact that we need the multilateral agencies to support us.

“Yes, trade is very important, but we need the multilaterals to ensure that all multinational companies that trade in Nigeria pay their fair share of taxes and that point was well taken,” she said.

Adeosun said that so far, Nigeria has been able to get commitment from multilateral agencies to invest in housing and energy in the country.

She was confident that before the end of the IMF/World Bank meetings, she would get some of the pledges and agreements tied to specific projects in the country.

The minister reiterated that Nigeria did not need loans from the IMF, adding that rather, it was pursuing budget support facilities from the World Bank and the African Development Bank.

Meanwhile, Secretary-General, Organisation of Petroleum Exporting Countries, Mr Mohammed Barkindo, said he had briefed the Nigeria’s representatives at the meeting on recent developments in the international oil market.

He said that OPEC was at the meeting to brief Commonwealth ministers of finance and central bank governors on the recent short time developments.

“I briefed them on the outcome of the last OPEC meetings and the immediate prospects. Our last meeting was not only positive for Nigeria, but to the entire group.

“If you recall, Nigeria together with the Islamic Republic of Iran and Libya are being considered as countries undergoing special circumstances.

“Therefore we agreed that they should not be treated at the same level as the other countries and this is a big relief to our systems and our colleagues from the central bank.

“Also, we have been able to avert a further price slum which was widely expected by the market.

“We thank God that since April, we have seen prices rebounding at almost seven per cent,” he said.