HOUSTON Tx-THE recent announcement of a huge discovery of oil reserve by Exxonmobil offshore Nigeria may not have come as a surprise to industry watchers who understands the huge amount of effort and investment that has gone into the Owowo oil field project even in the face of global oil price recession.

However, to many Nigerians both In and out of government, this came as a huge surprise and a breath of fresh air especially since all that has been heard from the all-important oil sector since the commencement of the global oil price drop as been one sad new after the other. 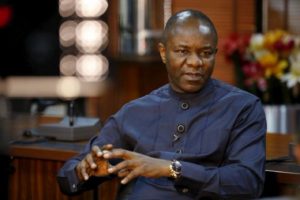 The Exxonmobil new discovery from the Owowo oil field is estimated to hold about one billion barrels of crude oil in reserve; this is highly significant especially for an economy struggling to get out of recession because at an average price of US$50 per barrel, the new field is worth US$50 billion in potential revenues for the Nigeria oil and gas industry over the next few years, with a potential to rise higher if the international prices of crude oil rebounds.

The onus now seems to lie on the federal government to develop a strategic plan to turn this new discovery into a major economic booster for the nation especially at a time when the government is now seeking the National Assembly’s consent for another loan of $29.96 billion for a three-year period.

Not a few analysts have also agreed that inspite of the diversification program of the federal government, oil will still remain the mainstay and chief foreign exchange earner of the country for another decade at the least and this simply makes it imperative for the government to come up with practical and strategic ways to leverage on this new discovery by the American oil giant Exxonmobil and its partners.

Johnson Chukwu, an economist and Managing Director, Cowry Asset Ltd, opined `that the development is encouraging and Nigeria can seize the opportunity of this discovery to increase its strategic reserve and boost its bargaining capacity to request for an increase in the allocated OPEC quota for the country.

“The Owowo discovery has shown that Nigeria’s high potential to increase production and reserve. The federal government should catch in on this discovery to encourage more investors to explore and boost our production capacity.

Exploration activities is on an all time low due to the fiscal framework, this means that the government should pass the PIB as this is a surer way to increase exploratory activities. This has become imperative because when the oil prices rebounds, Nigeria would definitely benefit hugely from the new prices.”

Chukwu further added that Government needs to encourage onshore exploration and production to compliment the deep offshore discoveries like Owowo. According to him the government stands to benefit more from this arrangement, and this can only be achieved if peace is restored to the Niger-Delta, so Government should get to work and get the Niger-Delta issue resolved so onshore activities can be restored.

By this discovery, Exxonmobil has further placed Nigeria on the positive global economic map, not only as a good business destination, but also as a country with huge potentials, while also re-affirming the IMF’s recent rating which sees Nigeria toping the chart as Africa’s largest economy even in a recession.

It is of note that while the price of oil is threatening investments in new projects globally, some strategic oil projects were ongoing in Nigeria. Projects that could go a long way in helping the foreign exchange receipt of the federal government. One of such projects is the Erha North project 2 which is a deepwater subsea development project located 60 miles offshore Nigeria in 3,300 feet of water and four miles north of the Erha field according to a report by the oil company.

Executing successful deepwater projects such as Erha North Phase 2 ahead of schedule is commendable and worthy of technical emulation. Exxonmobil says the project achievement results from its disciplined project management approach and expertise. The project further demonstrates ExxonMobil’s contribution to and support for Nigeria’s long-term goal of increasing its oil production volumes.

Some Industry analysts are also of the opinion that for reserves and production to be increased more projects need to come on stream and Nigeria surely has the potentials.

Also speaking on the Owowo oil discovery by Exxonmobil, Abiodun Adesanya, MD of Degeconek and President-elect of Nigerian Association of Petroleum Explorationists stated that while the discovery should be celebrated, the country needs to constantly review its contractual module across board, especially as it concerns PSCs and JVs agreements to suit the modern day industry realities.

According to him Ghana just reviewed its PSC agreement with oil field operators in the country to be more mutually beneficial while staying in line with international best practice.

He also supported the call on the federal Government to do all it could to pass the PIB as this is the quickest possible way to boost investments into the country, especially as it concerns more oil finds which is the only way of ensuring constant and adequate reserve replacement. He enthused.

From all indications however, the PIB debate cannot continue to linger at the national assembly, hence government should move fast and do the needful to enable an accelerated passage of that document.

As it has been established it is the panacea to the myriads of problems currently bedeviling the oil and gas sector.