ABUJA – Even As the Federal Government works feverishly to wound up the national electricity behemoth, Power Holding Company of Nigeria, PHCN, debts and liabilities owed by the company to other service providers is said to have accumulated to over N340 billion over the years.

The Managing Director of the Nigeria Electricity Liability Management Ltd. (NELMCO), Mr. Samuel Agbogun, who disclosed this to journalists on Monday in Abuja before an agency oversight visit by members of the House Committee on Power, also noted that the company aims to generate over N4.29 billion from the sale of PHCN properties in 2012, and more than N23.5 billion in 2013. 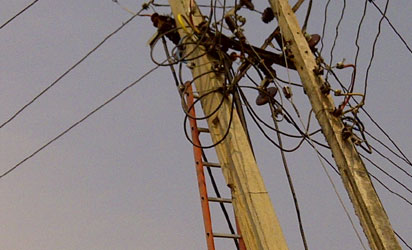 These involve the selling of PHCN’s non-core assets including the company’s London, United Kingdom properties, and staff quarters across the country.

He also noted that pensions owed more than 11, 000 retired staff in 2012 has amounted to over N10.8 billion, and may escalate due to the recent wage increase for electricity staff announced by the Federal government.

Agbogun explained that some of the debts owed by the company come from the difference in the cost of producing electricity by power generating companies and the tariff paid by consumers on power.

He said, “It is common knowledge that the tariff cost for electricity in the country is not reflective of the price for producing power, and this difference has accumulated over the years and it is borne by PHCN.

“Other liabilities or debts owed by the company come from creditors who supply cables  and other services used by PHCN, as well as liabilities to government agencies such as the Federal Inland Revenue Service, FIRS, among others.”

According to him, NELMCO has invited the various creditors of PHCN to bring proof of their claims from the expired power company, adding that due diligence would be carried out and claims confirmed before payments are made.

He said, “We have to do due diligence before these claims are paid; government has to find a way to pay these debts to ensure they don’t keep increasing. These were transactions entered into by the company prior to its liquidation and devolution into successor companies, and we are trying our best to manage the bad debts that have arisen over the years.”

He explained that the company was set up to administer the stranded debts and assets of PHCN pursuant to the provisions of the Electric Power Sector Reform Act 2005.

“We were set up to assume and manage pension liabilities of employees of PHCN, and to hold the non-core assets of the company (PHCN), sell or dispose off or deal in any manner for the purpose of financing and the payment of debts or other related matter,” he added.

NELMCO, he added, is also mandated to takeover the management and settlement of PHCN’s Power Purchase Agreement (PPA) debts, as may be determined by the National Council on Privatisation (NCP) from time to time.

“To this extent, we reserve the mandate to sell, mortgage, dispose off, deal in any manner of the property or assets of the company as they may be expedient with a view to promoting its objects,” Agbogun added.