A near air mishap was averted early in the hours of Thursday, February 9, 2012, as an electric power failure occurred at Nnamdi Azikiwe International Airport, Abuja, Nigeria when a British Airways flight from London was about to land.

Nigeria’s Minister of Power, Professor Bart Nnaji, was conscious of the implications of the incident for our national security and Nigeria’s international image and quickly ordered an investigation into the incident. 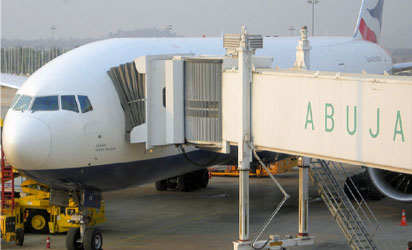 The investigation according to the Ministry of Power reveales that the power failure was not caused directly or indirectly by the Abuja Electric Power Distribution Company or the Transmission Company of Nigeria (TCN)or the Power Holding Company of Nigeria (PHCN). “There was electricity supply from the PHCN system when this incident occurred.

The PHCN, indeed, has two supply lines dedicated to Nnamdi Azikiwe International Airport, Abuja, in recognition of its eminence in the national scheme of things, and there is a standing ministerial instruction that the airport be supplied with electricity at all times once power is available in the Federal Capital Territory.

The ministerial investigation into the power failure at the airport has shown that the incident arose from the failure or inability of the generators at the airport to produce power at the time the British Airways airliner was about to touch down. It is standard practice for international air carriers to rely on power from airport’s generators when they are landing. The airlines rely on this source of power even when public power supply is available, as was the case this morning in Abuja.

In order to protect Nigeria’s reputation and promote national security, the Minister of Power has entered into discussions with his counterpart in the Ministry of Aviation on how the international airlines and the airport authorities can make fuller use of electricity supply from the PHCN, which has dedicated supply lines to many airports around the country, thus ensuring constant power availability at all airports in Nigeria, and enhancing safety and security at our airports.

Once again, the Ministry of Power reiterates its resolve to end the electricity blight in the country as soon as possible. The Minister of Power thanks all Nigerians for their understanding and cooperation as far_reaching measures are taken to make quality and constant power available to our people”