ABUJA– The President of the Trade Union Congress, TUC, Mr. Peter Esele has explained the reason for his non-participation in the meetings of the Special Task Force on Petroleum Industry Bill (PIB), of which he is a member, and which was created by the Minister of Petroleum Resources, Mrs. Alison Diezani-Madueke. 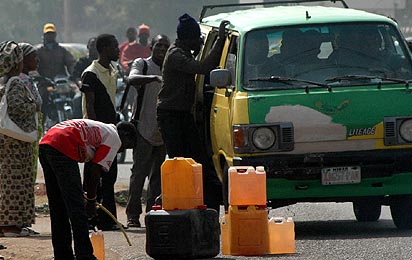 Esele, who made the explanation in a chat with journalists at the background of the Civil Society Strategy Meeting on the PIB, organized by the Africa Network for Environment and Economic Justice, ANEEJ, in Abuja, also stated that the formation of various task forces and committees to tackle the rot in the petroleum industry was a sign that the authorities had failed.

He noted that, “I do not think that we need all of these task forces and committees that are popping up all over the place, especially since the protest by Nigerians against the removal of subsidy. Most of these committee are simply duplicating certain roles and duties of agencies and organizations that have been in existence.

“Particularly, the latest one on Petroleum Revenue Special Task Force, which is charged to do what the Nigerian Extractive Industries Transparency Initiative (NEITI) has been doing. All the government needed to do was to go back to several audit reports produced by NEITI to see the missing revenues, and gaps in the management of the oil and gas resources in the country.”

According to Esele, “One of the reasons I am yet to attend any of the three meetings held by the Special PIB Task Force so far, is because I was not convinced that it was the right thing to do; I felt the creation of the task force was unnecessary in the first place. I also had to make certain what PIB document we would be discussing, given that we know there have been different PIB documents flying all over the place.

“Also, I felt I needed to consult with my constituency (labour and civil society) before I make myself available for the Task Force. It is vital that before I sit in that committee that I have a position I represent, and that is the position of organized labour and the civil society.”

The TUC leader, however, stated that after consultations with his constituency and pressures from other quarters, he has resolved to take up his membership of the Special PIB Task Force, in the belief that he would be in a better position to affect the outcome from the inside rather than from the outside.

“At this point, I am ready to go in and play my part towards crafting a plausible PIB, which will benefit the ordinary people ofNigeria. However, I am doing so with a caveat that I will not hesitate to tell Nigerians when things are going wrong with the process,” Esele noted.

Meanwhile, the Vice President of the Nigeria Labour Congress, NLC, Mr. Issa Aremu, has called for a national ownership and control of the nation’s oil and gas resources, noting that only the passage of a nationalistic PIB would help achieve that goal.

According to him, “The essence of our struggle in the labour movement is to enthrone a system of equity and national control of the oil and gas resources in the country. For us to do this, we need a holistic review of the laws governing the oil and gas industry.

“We believe that it is time for Nigerians to start adding value to the industry. We also need to make sure that Nigerian companies take over the control and management of the oil industry; we need to have Nigerian brands by local entrepreneurs to dominate the sector, unlike what presently obtains in the petroleum industry.”

Aremu alleged that international oil companies (IOCs) operating in the country import everything they use in the industry without regard to national labour laws, adding that, “They have been importing foreign labour to come and take jobs in the country at the detriment of millions of qualified graduates in this country.

“Our hope is that this situation will change with the passage of the PIB. We plan to sustain the struggle to ensure that the PIB that will serve the interest of Nigerians is passed for the larger benefit of the country,” he added.