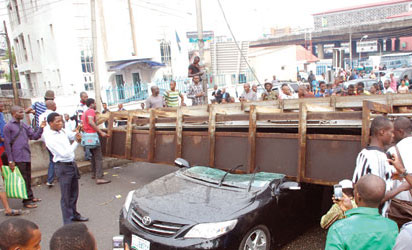 A Toyota Camry damaged by a large signpost during the storm at Obalende, Lagos

Public Affairs Manager PHCN Agbara district, Ibrahim Adeleke said some areas in the district have been without power supply due to the heave storm adding that engineers have spring into action.

The affected areas include Opic Estate, Ayetoro, Igborosun and some part of Badagry.

Adeleke noted that the repair of the damage installations runs into millions of naira adding that cusstomers should be patience as power will be restored soon.

At least five people were reported killed in the disaster and property worth millions of naira was damaged. Indeed, it would take some time to have an appropriate estimate of the magnitude of destruction and loss of lives, with many victims still counting their losses.

The Meteorological Manager at the MurtalaMuhammed International Airport, Ikeja, Lagos, Mary Iso, put the speed of the wind accompanied by light rain at 74 miles per hour indicating that this was heavy, especially in an environment not used to such natural disasters, is an understatement.

The Lagos State Government had hinted of the possibility of such an occurrence, especially in the light of the experience in the state last year when a heavy downpour led to the deaths of many people in the state, and the loss of valuable property.

The state government, in December, last year told Lagosians to brace up for weather-related challenges due to climate change.

Governor BabatundeFashola blamed the Federal Government over the fallen masts , especially the one that killed a school teacher in Lagos Island.

“The incident happened because the telecommunication company failed to adhere to the prescribed safety standards by the state while erecting the mast. If the Federal Government had not in 2007, restricted the state government from regulating the erection of masts through the Lagos State Infrastructure Maintenance and Regulatory Authority, LASIMRA, which they (FG) argued falls within the purview of the Federal Government, the life of that teacher would not have been lost on Monday”