—-Wins Oil and Gas Man of the Year award
ABUJA – The Executive Secretary of the Nigerian Content Development and Monitoring Board, NCDMB, has said that the effects of the implementation of the local content mandate of the Federal government was already being felt in other sectors of the economy, noting that the Board was prepared to notch its activities up in the coming year.

Engr Ernest Nwapa, stated this on Thursday at an event where he was honoured with the Man of the Year award by an international energy publication, The Oil and Gas Year (TOGY), in Abuja. 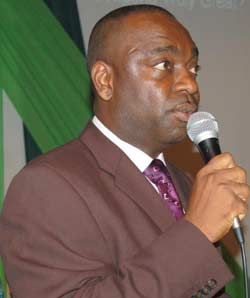 According to him, “The Nigerian content law is designed for the oil and gas industry, but as a concept and philosophy it covers the entire country such that even without our doing much in that regard, the effects are already being felt across other sectors of the nation’s economy, including the financial sector among others.

“What we are doing is to change is people’s behavior and attitude; once people begin to see that we are focusing on the right things and that we are getting results, we believe that on its own the other industries will begin to adopt the local content philosophy.

He noted, for instance, that in the marine industry, the Board has made a lot of progress with operators of the service vessels.

“However, we are still working on the big vessels that carry crude to make sure they adopt fully the nation’s local content policy. We are also looking at the area of component manufacturing, towards making sure that we manufacture components in Nigeria so that even when local contractors get jobs they don’t rush off abroad to get the components they need,” he noted.

According to Nwapa, the journey to spread the philosophy of local content development in the nation’s oil and gas industry over the past few years has been relatively successful, as it has been challenging.

“Local content is a positive concept, and even people who don’t agree with it initially would begin to see it is indeed valuable. Having a good knowledge of the industry and having the support of the Federal government makes the work so much easier. But there is still a lot of work to be done, a lot of people that we need to convert, and areas we need to get to. What matters, however, is that the ship has set sail and once we start cruising, we believe a lot of people will come on board.”

Nwapa further pointed out that the Board has no intention of resorting to punitive measures to whip oil and gas companies into line, stressing that the policy of engagement was still the best.

“The model we have used, which has proved to be quite successful, is one of persuasion, collaboration and advocacy. We also place a high premium on demonstrating value and teaching people, which has worked effectively to bring some of these companies around to our viewpoint.

“There are certain aspects of the Local content law that cannot be implemented in the present environment; some things in the Act cannot be achieved under the present circumstance. When you have a failure and you try to correct it and the people get on board, you don’t quarrel with it. We are not interested in raising money for wrong behavior, but we are interesting in correcting the failure.

“Our success at the NCDMB is measured by the work other people do. We recognize that no matter how much we do, if we don’t convince the stakeholders that what we seek to promote would create value for them we won’t achieve much success,” he said.