LAGOS-Officers of the Nigerian Navy has been charged to make sure that they maintain proper conduct at all times in carrying out their duties, especially as it concerns their relationship and dealings with their civilian counterparts.

Speaking in Lagos yesterday at an elaborate farewell parade organized in his honor, the outgoing flag officer commanding Western Naval Command, Rear Admiral E.O Ogbor reminded the officers of their sworn duty to defend and protect the people and territory of Nigeria, saying that they must not turn around to oppress the same people they have sworn to defend. 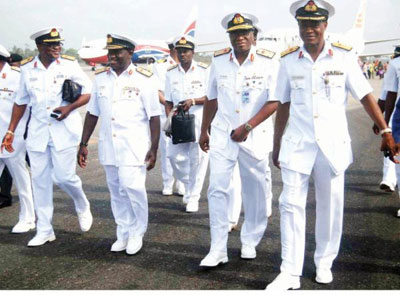 Rear Admiral Ogbor charged the men to always subject themselves to constituted authority and the constitution of the Federal Republic of Nigeria.

He said that the Nigerian Navy is going through a transformation process, even as he told the officers that “We must be guided by discipline, which is the foundation of our profession, it is only through discipline and attitudinal change that we can achieve the transformation agenda of the Chief of Naval Staff” he said.

Recounting his achievements in the past 18 months as flag officer commanding, Ogbor said that the command has been able to arrest several illegal bunkerers, pipeline vandals, sea robbers and pirates.

According to him, the command is currently involved in a combined operation with the Beninoise Navy code-named “OP PROSPERITY”.

He explained that the operation is aimed at curbing piracy, hijacking of vessels and other forms of illegalities within the Nigeria-Benin maritime boundaries and that it has so far led to the arrest of several vessels.

He also said that with the recent arrival of the war ship ‘NNS THUNDER’ the command has gradually started taking its rightful place on the waters and thereby ensuring the security of Nigerian maritime environment.

Addressing the officers, Ogbor said “our performance at sea remains our greatest achievement; I have every faith in you that you will continue to sustain naval presence at sea and eventually take command of the sea”

Continuing, he pointed out that these modest achievements could not have been possible without the moral, professional and financial support of the Chief of Naval Staff, Vice Admiral Ola Sa’ad Ibrahim.

The incoming flag officer for the western naval command, Rear Admiral A.O Ikioda is expected to be sworn in on  the 8th/3/2012