Conoil Plc has launched a special lubricants promo to reward motorists using its premium engine oil, Quatro Ultra to service their cars. The promo is also aimed at exposing new users of the oil to its acclaimed international quality.
The promotion, tagged “Quatro Airtime Bonanza”, guarantees car owners as much as N5,000 free Glo airtime recharge card whenever they purchase 4-litre gallon of Quatro Ultra.
Already, the Quatro promo has been generating ripples in the lubricant market as motorists have expressed support for what they regard as the first of its kind in the industry. 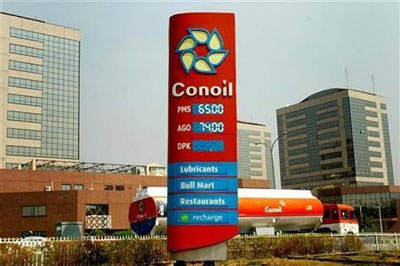 According to Prince Ade Obiwusi, a Lagos-based transporter, the offer has further re-enforced consumers’ loyalty to the company’s products. “It is remarkable that Conoil has deemed it fit to offer reward to loyal customers. It is an incentive to continue to buy its products,” Obiwusi said.
“I am excited. I bought the oil and found N2,000 worth of Glo airtime in it,” Rasheed Popoola, an Idi-Iroko-based auto mechanic affirmed.
In a statement issued in Lagos, Conoil explained that the unique consumer promo is aimed at rewarding its customers for making Quatro their choice engine oil, while first time users are assured of its top quality.
According to the statement from Conoil, Quatro Ultra guarantees engine protection, top level performance and superior fuel economy for car engines. With its donut symbol of the American Petroleum Institute (API), which is a globally accepted symbol for top quality engine oil of international standard, the lubricant contains highly refined paraffin base oils and hi-tech additives that ensure minimal fuel consumption, retain oil thickness and protect car engine from rust.
Quatro is the first lubricant in Nigeria with the SM grade and has won the industry’s most coveted Lubricant of the Year Award on two occasions.
Encouraged by the current demands for the product, Conoil said it has finalised plans for massive exportation of the oil to neighbouring West African countries. The export plan is the outcome of an exhaustive business research, which revealed a viable market for the brand in the sub-region.

The company, which currently controls about 30 percent of the nation’s lubricant market, has upgraded and expanded its lubricant blending plants at its Apapa, Lagos, Port Harcourt and Kano depots, with a view to meeting and surpassing customers’ ever increasing demand for the oil.