ABUJA – In an effort to ensure a detailed and precise account for Nigeria’s gas production the nation’s Committee on Gas Resources, headed by Senator Nkechi Nwaogu, had a meeting a last week with the International Oil Companies in Abuja.
The meeting was prompted by accusations leveled against the International Oil Companies (IOCs) that they are frustrating government’s effort in installing real time gas monitoring equipment that will give accurate figure on the quantity of gas produced and utilized in the country. 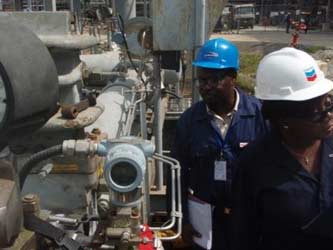 The Contractor handling the installation, Riverman Technologies Ltd, had told the Committee in a previous meeting  that the IOCs refuse them access to the sites where evaluations are to be done.
“This has become a major bottleneck to the completion of the job. The IOCs do not give us permission to carry out evaluation in their sites. Where evaluations are done and engineering report sent to them, they do not get back to us. And that is a major setback for us,” Ambrose Akpotair, representative of Riverman Technologies Ltd complained.
The contract was awarded in 2009 with the expectation to be completed in nine months. But almost four years down the line, only 8.3 percent of the job has been achieved. Out of 116 locations, only 10 sites have been installed with the monitoring gadget.
The major culprit in this regard, according to investigation, is the Shell Petroleum Development Company of Nigeria Limited, SPDC. Out of the 116 sites, SPDC owns 70 locations. None of the locations have been installed with the equipment.
Head, Real Time Operations of Shell, Mr. Isaac Ukpebor, put a weak defense on why none of the locations have been installed with the equipment. “There is propriety agreement which has to be sorted out and also, the issue of security is a challenge. There are some of the sites where we can’t go because of security issues, so we can’t ask the contractor to go there.”
Ukpebor further noted that Riverman Technologies Ltd appeared not to have the capability and capacity to handle such contract, hence the delay.
But Akpotair told the Senator Nwaogu-led Committee that Shell has never communicated back to them on why they deny them access to the sites.
On the propriety agreement and incompetence of Riverman which Shell complained about, Senator Nwaogu wondered why it is only Shell that has noticed such lapses with the contractor. “Why is Shell the only company that is having issues with the contractor? You may say that you are a big company, but Chevron is equally big and the contractor has installed in four of their locations. Shell has the largest number of locations yet the least accommodating,” Nwaogu complained.
Riverman Technologies told the Committee that Shell is rather asking DPR, the regulator of the oil and gas sector to use the same kind of software it is using rather than introducing a new one. But if that is allowed, the essence of installing the equipment which is for government to have independent monitoring will be defeated.
“If you allow government to install its own equipment, will there be any financial loss to you; will there be any production loss; why is it hard for you? Nkechi queried Shell. She insisted that her committee would not tolerate any further excuses that will delay the installation of the equipments in gas production sites.
“We are determined to see that gas is included as revenue source for the country. We have this commodity in abundance yet it has not impacted much on Nigerians in terms of standard of living,” Nkechi Nwaogu affirms.
She equally asked the IOCs to develop infrastructure that will aid domestic consumption of gas rather than the companies focusing on export. She expressed worry that despite the abundance of gas in the country, Nigerians still cook with woods and kerosene which she says are hazardous to the environment.
At the end of the meeting, Shell agreed to increase collaboration with the contractor to ensure that the equipments are installed in the locations. Segun Aluko of Chevron told the Committee that his organization is finalizing plans to increase the supply of gas for domestic use. Shell and Mobil equally agreed to do same.