…gets set to carry out next FPSO integration in Nigeria

IN view of the seeming over-dependency on oil proceeds Nigerians and the national economy can only derive maximum benefits from the Oil & Gas Industry if the Nigerian Oil and Gas Industry Content Development Act is implemented to the latter. 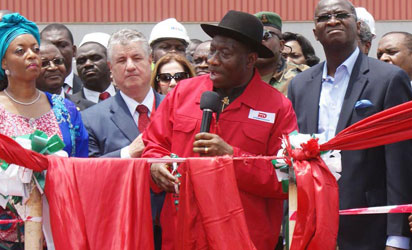 According to him, “Until we make sure that the requirements of the industry; at least a reasonable per cent are produced in the country, Nigeria as a nation cannot benefit from the industry.

“Our gross national earning from the sector is more than 80 per cent, so it is from the oil sector that we can industrialise.”

The President maintained that it was by developing capacities locally and owing assets used in industry operations that the sector can increase employment opportunities, produce and utilize more locally manufactured goods and components.

He regretted that the failure to attain the old target of 70 per cent local content in the industry by 2010 was as a result of limited capacity, adding that the accomplishment by Nigerdock will spur capacity building by other companies.

Jonathan described the completion of the Satellite Fields Development Platforms- the first to be achieved locally-as a proof that Nigerian Content Act was already yielding the expected transformational results.

According to him, “What we have witnessed today is a demonstration of the rightness of the local content law. When you consider that oil and gas sector accounts for over 80 percent of the country’s income then you will appreciate the importance of what the law can do to transform our economy.”

Commending Nigerdock for the feat, the President assured investors and other stakeholders of his administration’s commitment to the full implementation of the Nigerian Content Act.

Also speaking, the Minister of Petroleum Resources, Mrs. Diezani Alison-Madueke thanked the President for signing the Nigerian Content Bill into law and earmarking its implementation as key to his administration’s transformation agenda.

According to her, “The result is that while revenue from oil production activities has been impressive, there is no employment growth and little impact on our GDP from industry activity.”

The Minister further explained that by fabricating the platforms and similar structures locally, Nigerdock’s facility supports a workforce of over a thousand, provides practical training and employment opportunities for hundreds of engineers and welders and is attracting international technical partnerships and investments for upgrade of plant and infrastructure.

She recalled that structures like FPSO topsides, offshore platforms, buoys, subsea trees and pressure vessels had been fabricated in Nigerdock and other Nigerian yards and promised that the next FPSO topside Integration will be executed in a Nigerian Yard in compliance with provisions of the Nigerian Content Act.

Madueke confirmed that Nigerian Content interventions have galvanized the entire industry, adding that the implementation model adopted by the Nigerian Content Development and Monitoring Board had resulted in successful collaboration between the Nigerian National Petroleum Corporation, International Oil Companies, Multinationals, Equipment Manufacturers and Local Service companies.

With the Federal Government planning to achieve Final Investment Decisions for new projects estimated to be worth over $150bn in the next 5 years, the Minister said efforts had progressed to ensure that there will be enough yards, facilities, institutional knowledge and trained manpower to execute a high proportion of the works in Nigeria to international standards of quality and safety.

Also speaking at the occasion, Chairman of Nigerdock Nigeria Plc, Mr. Anwar Jarmakani, said the company’s plan was to ensure that the planned integration of an FPSO in-country will be executed at Nigerdock to further contribute to the development of the sector.

He claimed that the company’s facilities were the best suited for such jobs in West Africa, noting however, that heavy investments will be needed to realize the target.

Jarmakani added that the completion of Abang and Itut Platforms compromises the construction and load out of two offshore Well head Platforms complete with Jackets, Piles, Boat Landing platforms and subsea templates.

He said the event took the Nigerian content drive closer and faster to its objectives and assured that the company will continue to break new grounds until those jobs that used to be handled abroad were brought back.