LAGOS-In response to the rising spate of attacks on vessels within Nigeria’s maritime domain, Nigerian maritime stakeholders have called called for the death sentence on anybody caught in the act of piracy or any other unlawful acts on Nigeria’ s territorial waters.

This call was made today in Lagos at a one day stakeholders forum on ‘the draft piracy and other unlawful acts at sea bill’ organised by the Nigerian Maritime Administration and Safety Agency (NIMASA).

A cross section of industry stakeholders picked holes in some sections of the draft bill which NIMASA as a member of the International Maritime Organisation (IMO) intends to send to the National Assembly (Parliament) for domestication in Nigerian laws, specifically, section 17 which deals with the punishments that should be meted out to pirates, and sections 3 which deals with spelling out the agencies that should make the arrests. 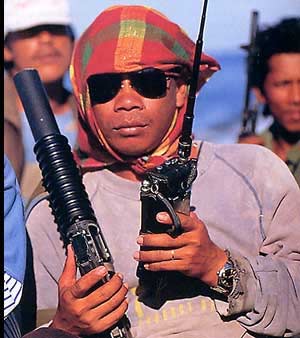 Speaking at the forum, President of Nigerian Trawler Owners Association (NITOA) Mrs. Margaret Orakwusi called for death sentence on offenders because acording to her this will further deter them from going into the crime.

“We object to section 17 (1) of the bill, we should stop treating these criminals with kid gloves, if we are rehabilitating criminals, what happens to the victims, I think nothing less that a death penalty should be given because when they attack our vessels they kill our crew members and most times they throw them into the cold room, this is a painful way to die, so why should such a criminal be sentence to 20years imprisonment? A life for a life is what i advocate for” she stressed.

She also fingered Nigerian banks as part of the piracy scheme because they are used to collect ransom from the victims, she adviced that such banks be sanctioned and their licenses should be withdrawed because most of the time they fail to funish the authorities with the details of these accounts.

Also faulting the draft bill, representative of the Indigenous Shipowners Association (ISAN) at the forum, Barrister Emeka Akabogu called for the removal of the clause that provides for option of fine and life imprisonment, rather, it should be changed to death penalty for all unlawful acts committed on Nigerian waters either with arms or without arms.

The office of the National Security Adviser (NSA) was represented at the forum by Mr. Njokwu Erasmus also suggested that before the bill is sent to the National Assembly, it must be more robust that it presently is, particularly in the area of enforcement and punishment for sea pirates arrested henceforth.

Also speaking, Dr. Chinelo Koko from the Nigerian Chamber of Shipping (NCS) lamented that many of their members could not take part in the international oil trade as a result of the insecurity on the waters.

“For us at chambers, we know those affected, they are our members and we feel their pains” she said.

She however pointed out that in section 3 of the bill which has to do with enforcement of the penalties, the draft bill did not specifically mention the agencies which will be used to enforce the laws.

Supporting, the Nigerian Navy team at the event which was led by Captain Ibrahim .M Chonoko also pointed out that there are still shortcomings in the bill because it did not spell out which agency will be used to arrest and prosecute offenders of the law.

Captain Chonoko admitted that the Nigerian navy currently lack the equipment or the capacity to go to sea, “we cannot do it, because to carry out our functions we have to be armed”

” We do not have the capacity to go to sea and stay for a month in order to curtail piracy, the sustainability and capacity and motivation is not there, maintaining naval presence at sea is not a childs play, it cant be compared to the army, what it takes to maintain a vessel at sea for a month is enough to feed ano army batallion for a year” he stressed.

The ‘draft piracy and other unlawful acts at sea bill’ was prepared by a legal consultant and a Senior Advocate of Nigeria (SAN) Mr. Mike Igbokwe, the draft was approved by NIMASA with contributions from an IMO consultant, Mr. Augustine Blakobaza in response to the international conference on piracy at sea held in 2008 in Abuja.

According to Mr. Igbokwe, the recomendation of the conference was that there should be a legal framework to implement the law on piracy in Nigeria.

“Nigeria is a member of IMO and by virtue of this it has entered into some of the treaties of IMO, but not all of them have been domesticated and enacted into law by the National Assembly, therefor it is not enforceable” Igbokwe said.

Speaking earlier in his welcome address, the Director General of NIMASA in his speech presented by the Executive Director Maritime Labour and Cabotage Services, Hon. Ibrahim Zailani had explained that the essence of the forum is for stakeholders to panelbeat the bill and recomend and also adjust it before its sent to the NAS.

The meeting which was chaird by retired Justice Emmanuel Sanyaolu also drew participation from master mariners, maritime lawyers and other maritime industry bigwigs.