LAGOS-AFTER nine years of enactment into law and eight years of unsuccessful attempts to put it into enforcement, stakeholders in the Nigerian maritime sector have finally come to terms with the reasons why the Coastal and Inland Shipping Act, popularly known as Cabotage law in Nigeria has failed.

At a one day sensitization and consultative forum which held in Lagos today at the instance of the Nigerian Maritime Administration and Safety Agency (NIMASA) which is the enforcement agency of the law in Nigeria, a cross section of maritime practitioners agreed at the forum that the law has failed to give the envisaged financial impetus and active participation in Nigeria’s’ maritime trade to indigenous companies. 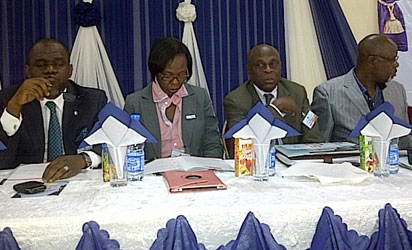 Nigerian Maritime stakeholders at the one day summit on cabotage law which held in Lagos 27/03.12.

Speaking at the forum, a frontline maritime consultant, Hon. Green Ekeledo pointed out that one of the factors that has militated against the law in Nigeria is the lack of collaboration among the indigenous ship owners, he said that their refusal to come together and be unified during the bidding processes for contracts has made them vulnerable in competing with the International Oil Companies (IOC).

He also identified the inclusion of the waiver clause in the Cabotage Act, and according to him  the reasons for having such a clause are no longer existing hence it should be terminated.

Hon Green advised that NIMASA should approach the National Assembly to replace the waiver clause with ‘the right of first refusal’ clause which in his opinion will give indigenous companies considerable advantage when bidding processes are carried out.

“The waiver clause should be expunged because Cabotage is a home trade and not foreign policy business, and we now have more Nigerians qualified to handle the business”.

He also said that the 2% that is being collected by NIMASA on every vessel that berths in Nigeria is not enough and that there is need for the National Assembly to put an Act in place to increase the money in order to strengthen the development of the Cabotage Vessel Financing Fund (CVFF).

Also speaking at the forum, the Executive Secretary of the Nigerian Content Development and Monitoring Board, Eng. Earnest Nwapa, who was represented at the forum by Mr. Wole Akinyosoye, identified the proliferation of small vessel owning companies as the reason why Nigerians have been unable to get contracts in the upstream oil business.

Nwapa advised that the indigenous practitioners should put heads together fuse into one big company in other to be able to benefit positively from Cabotage.

Another veteran mariner and maritime consultant, Otunba Kunle Folarin, pointed out that the four pillars of the Cabotage is a mere façade which is not really obtainable in the industry.

The four pillars requires that the vessel operating in Nigeria must be built in Nigeria, owned by Nigerians, man by Nigerian crews and registered in Nigeria.

According to him, there has not been the required synergy between NIMASA and the various government agencies and ministries like the Finance ministry, Agriculture ministry, and others that will assist NIMASA in the enforcement of Cabotage.

Otunba said that there has been a gap between demand and supply; he identified ship building and ship repair yards as areas that Nigerians have not been able to venture into and which are fundamentals of Cabotage.

“Ministerial antagonism must stop, the ministry of finance oversees the customs, but the customs are not here, are we going to implement Cabotage without the customs? Its not possible” he stated.

Otunba however called for the establishment of an inspectorate unit NIMASA to monitor vessels and compliant levels, according to him, Cabotage cannot be only be enforced administratively.