LAGOS-As part of efforts, aimed at bringing an end to the incessant road accidents claiming hundreds of lives on Nigerian roads the Shell Petroleum Development Company has announced its readiness to support the Nigerian Government in fighting the seemingly unending menace.

Speaking at a Shell organised training programme for the Federal Road Safety Corps, the Nigeria police as well as the Nigeria Security and Civil Defense Corps personnel on road safety and risk management workshop earlier today the Managing director and Chairman, Shell Companies in Nigeria Mr Mutiu Sunmonu, said his company is committed to supporting the implementation of the United Nation’s Decade Action for Road Safety Action Plan in Nigeria, through other initiative, such as its Child road safety Education programmes. 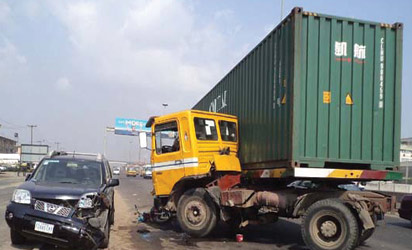 Sunmonu, said that Road safety is one of his company’s focus areas in the drive to improve the culture of safety within its operations, “because we know too well the risks and importance of road safety management in our operations and we are also externally focused because we do not operate in isolation.”

He added that Shell petroleum development company, (SPDC), is pleased to be involved in the initiative of safety, as safety is an integral part of the operations of all Shell companies in Nigeria. “Safety First” isn’t just a slogan in our operations, Safety is a way of life and work” he said.

Sunmonu, also added that the workshop is part of a national programme which commenced with a development workshop, in five Niger Delta States in 2011 and similar workshops are also planned for road safety practitioners throughout the country, and that SPDC believes that this will enable effective regulatory enforcement, which is very essential for road safety management.

According to him, he said that statistics, shown from the World Health Organisation, shows that road traffic accidents remain the leading cause of death by injury globally and it is the tenth leading cause of all deaths and the ninth leading contributor to the burden of disease, sadly, over 90% of these fatalities occur in low and middle income countries, even though these countries have only 20% of the world’s registered vehicles.

He pointed out that there is  need to shift from ad-hoc road safety activities to developing and implementing sustainable programmes, which requires certain conditions, such as  competent road safety personnel, making road safety a priority at all levels, making sure that funding is available to implement programmes and ensuring efficient planning, implementation, monitoring safe activities of the road.

Also speaking at the event, Nigeria’s Corps Marshal and Chief Executive, Federal Road Safety Corps, Osita Chidoka, said the vision 2020 of the Federal Government’s transformation agenda as encapsulated in the document of making Nigeria become one of the 20 biggest global economies in the world, could be impaired due to dissipation of human lives and properties occasioned by avoidable road crashes.

Chidoka, said that the FRSC’s strategic road map into the vision 2020 programme, is that if Nigeria’s economy hopefully grows as envisaged in 2020, then the Corps would be able to articulate how to manage the estimated 40 million vehicles that would be plying the roads of a prosperous and transformed Nigeria.  He added that as a responsible lead agency in charge of road safety management and road traffic administration, FRSC will continue to provide world class access to the motoring public especially the indigent and urged hospitals to provide prompt Medicare to victims of road traffic crashes.

According to Chidoka, in 2011, out of 4,765 road traffic crashes that was recorded nationwide, involving 17, 464 victims who sustained various degree of injuries the FRSC road side accident clinics alone treated 12,591 free of charge of these crash victims and this represents 72.10% of the total number of people treated from road traffic crashes. “And in our commitment of ensuring safety to road users, we have set a target of reducing road traffic crashes by 30% and fatality resulting, by 20% in 2012 over 2011 figures.”

Chidoka, further added that the World Health Organization, (WHO), has estimated that globally about 1.3 people die annually due to road traffic crashes and this figure includes the over 4,000 people that perish annually in this country.

Continuing, he said he believes that if other corporate organizations in Nigeria, can  emulate the noble gesture of Shell it will become easier for the country to achieve the goals of the UN Global Decade of Action (2012 – 2020) of reducing road traffic fatality by 50% in 2020.