LAGOS-The Nigerian government has reiterated its commitment towards the eradication of lead poisoning brought about as a result of illegal and improper handling of mining operations in the country. 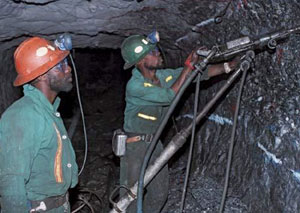 The Minister of Mines and Steel Development, Arc. Musa Mohammed Sada made the reaffirmation when he received in audience a delegation of medical officials  of Medecins Sans Frontieres  (Doctors without Borders) led by the Conference Coordinator, Mr. Ivan Gayton in his office.
Arc. Sada commended efforts of the ‘Doctors without Borders’ at controlling effects of lead poisoning in the country particularly  in Zamfara State, noting that the Ministerial committee on lead poisoning which comprised the  Ministries of Health, Environment, Water Resources and Labour was working proactively at  finding a lasting solution to   the menace.
The Minister blamed the problem of lead poisoning was as a result of people looking for means of livelihood hence they resorted to mining without proper ways of handling thereby exposing themselves and their families to lead dust.
According to him, the Federal Government had taken various initiatives which included formalizing the operations of artisanal miners, provision of extension services, water for the communities and establishment of medical unit in the hospitals for the artisanal miners towards achieving safety in mining.
The Minister further explained that formalizing the activities of artisanal miners would afford them the opportunity of getting grants from the government which could be used to purchase mining equipments to facilitate their safe mining operations.
Sada decried the active participation of local authorities at encouraging illegal mining, saying that, steps were being taken by the federal government to dialogue with appropriate local authorities to curtail the menace.
He added that with the spate of illegal mining in the country, government would also establish minerals buying centre which does not required issuance of mineral title across the country.
The minister reaffirmed the government’s resolve to partner with ‘doctors without borders’ and relevant stakeholders towards the eradication of lead poisoning in Zamfara and other states in the country.
In his remarks, the Conference Coordinator of Medecins Sans Frontieres, Mr. Ivan Gayton stated that the purpose of their visit was to seek support from the government in order to be proactive in fighting the menace of lead poisoning in Zamfara state.
He noted that the incidence of lead poisoning could not be stopped but could only be controlled through safe methods of mining operations
He noted that though hundreds of deaths of children had been recorded with thousands still at risk as a result of the incidence of lead poisoning, there was less than five percent mortality rate at present.
Gayton further noted that the crisis had been controlled with the efforts of the organization which had spent over $10 million (N1.6 billion) annually in Nigeria, and more than $4 million (N602 million) specifically in Zamfara State, for treatment of patients since the outbreak of lead poisoning in the country.
According to him, his organization has so far treated 2,500 victims in the state till date. “We are expecting that another 1,500 children are to be treated but, unfortunately, 100 of the children have also died.”
He added that, “Our worry now is that about 10,000 people in a village called Njega still in the state are yet to be treated.”
Gayton expressed confidence that knowledge about the harsh effects of poor mining methods was quite widespread around the country, even as he called on government to put in place remediation measures that would ensure safer mining operations that prompted the outbreak of lead poisoning for the artisanal and small scale miners in the country.
He charged that government’s efforts in remediation should also be geared towards teaching safe mining methods to local miners and not necessarily stopping them from making a living out of the natural resources. “What we are recommending is for the creation of safe mining opportunities through provision of proper equipments for mining, encouraging dry mining and all that,” he said.