…Maevis should die a natural death

LAGOS-FOLLOWING the ongoing contract controversy between the federal government of Nigeria and Maevis Limited, Aviation workers in country have today protested against the planned return of former Federal Airport Authority of Nigeria, FAAN’s concessionaire, Maevis Limited saying that Maevis should be allowed to die a natural death.

The unions under the aegis of the National Union of Air Transport Employees (NUATE), Air Transport Senior Staff Association of Nigeria (ATSSSAN) and the Trade Union Congress (TUC) noted that the concession agreement between FAAN and Maevis was lopsided adding that it was not favourable to FAAN. 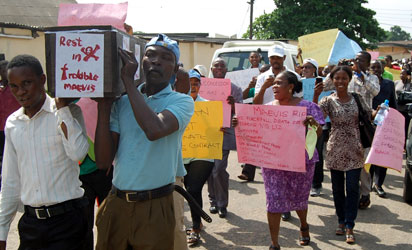 Our correspondent reports that over a hundred of the union workers were seen at the freedom square venue at Lagos Airport protesting against the coming back of Maevis Limited as FAAN’s revenue collector.

It was further gathered that most of the workers were carrying placards with inscriptions like, “Maevis should be allowed to die a natural death,” “workers will shut down the airspace if Maevis returns,” ‘EFCC should investigate the operations of Maevis at the airport,” and “Maevis is a drainpipe,” among other protesting placards also carried a mock coffin of the concessionaire with the inscription “R.I.P.”

Speaking on the protest against the coming back of Maevis, President of the Air Transport Service Senior Staff Association of Nigeria (ATSSSAN), Comrade Benjamin Okewu noted that the unions would ground the aviation sector if Maevis was allowed back by the Federal Government.

“Maevis Limited is one of the concessionaires of FAAN and since the movement for the survival of FAAN came into place, about five concessionaires have been sent out; Pan Express Limited was sent out of the airport charges agreement with FAAN, Terminal Zero car park here in Lagos Airport was returned to FAAN, VIP lounge in Abuja is today under the control of the unions, the tollgate in Abuja was also revoked”

“For all of those we sent out, none of them has returned and there is nothing on earth that will make Maevis Limited returns. Let me say this critically, what you are seeing today is the manifestation of the fact that the entire FAAN’s workers are behind what is happening. No one is using us as speculated in some quarters. What you have seen here is to show you that we have the mandate of the people to support, to fight, to struggle and that is exactly what we have exhibited. There is no way that mandate can be withdrawn for them to come back into the system”

“If per adventure, they manipulate in anyway for them to come back,we will, stand here waiting for them to crush everybody before they commence operations. The Federal Government of Nigeria will have 9,000 FAAN staff and pensioners to contend with. Then, we will join it with other aviation parastatals and collaborate with other aviation workers to ground the aviation operations in Nigeria” he stressed.