LAGOS-After six years of prolonged deliberation on the project, the Nigerian Ports Authority has finally commenced the construction of the famous 1.6 kilometer port access road at the Apapa premier port.

When completed, the road which is in the heart of Apapa port operation and which would cost a whooping N3billion is expected to service all the terminal operators and other port users. 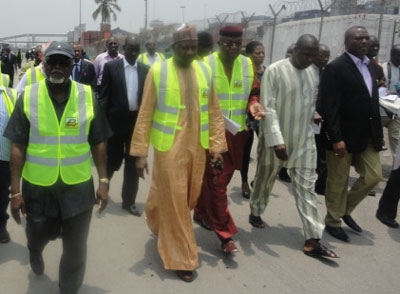 Leading top management team of the NPA on an inspection of the project earlier today, Managing Director of NPA, Eng. Omar Suleiman explained that the project has been delayed as a result of misunderstanding of the port environment and real nature of the project by the Bureau of Public Procurement (BPP).

Fielding questions from Journalist at the construction site in Lagos yesterday, Eng. Suleiman explained enthusiastically that “We have been on this project for the past six years but now we are happy the project has started”

He explained that the road is going to have a dual carriage way of 3lanes each on both sides which is to be completed under 18months.

According to him, the road construction will not disturb port activities in anyway because it is going to be handled per 500meters in order to avoid traffic inside the port.

“The road is for heavy traffic so we cannot afford to make this road very light, averagely it is about three and half lane, so that when a truck breaks down it wont disturb traffic on the road” he said.

The project was awarded to Messers PW Construction Company. While speaking at the site, Engineer in charge of the construction, Mr. Ebenezer Osoba reiterated that the total weight of the road is 30meters wide with provision for lighting and drainage so that on 24hrs the road is functional.

“we are in Apapa now, we have finished Lillypond, also in Tin Can we have done 3roads including the lighter terminal 1&2 and also the service lanes in Porthacourt
”

“we are just waiting for the national rail to come up so that we can keep link, without this we cannot do anything, we appreciate that we need to improve logistics within the port, this is why we have completed the rail and we are now starting the road”

“We have also awarded the rail inside porthacourt port, we are doing the one in TinCan Island port, these are to create easy movement within the port” he stated

Apart from this, Eng. Suleiman also inspected the newly installed security snd access control gadgets at the Apapa port, the essence of the gadget is to monitor the movement of human and vehicular movements in and out of the port.

This projected have since been handed to a company; Map Telecommunications Limited for maintenance of the port access control.

General Manager of the company, Mr. Orien Barinbum explained to journalist that the network is to keep track of all the movements in the ports, both pedestrian and cargoes coming into the port.

“port passes will be issued so that at every point in time we can know who is inside the port, every person coming into the port is being registered on the system, this will also assist us in controlling the traffic”

“In cases of incidences like rioting or gathering of people, the cameras can pick far away and analyseS how the whole process started and be used as evidence. All the agencies coming into the ports are also given duty cards which is used to register their entrance into the port” he explained.