By Laz IBEABUCHI
LAGOS-Nigeria’s Minister of Fionance and frontline contender for the position of the President of the World Bank, Dr. Mrs Ngozi Okonjo Iweala has congratulated the new Presidentb of the world Bank  Dr. Dr. Jim Yong Kim.
The minister however flawed the process through which Mr. Kim emerged as according to her, it was not based on merit.
Meanwhile, Nigeria’s President,Dr. Goodluck Ebele Jonathan has also congratulated Dr. Jim Yong Kim on his election as the new President of the World Bank. 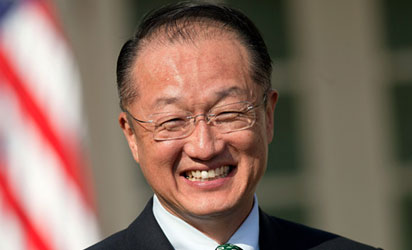 President Jonathan also thanked the leaders, governments, peoples and friends of developing countries, as well as the media and other civil society groups, for the support and encouragement given to Nigeria’s Coordinating Minister of the Economy and Minister of Finance, Dr. Ngozi Okonjo-Iweala.