The group, which wants Sharia (Islamic) law more widely applied across Africa’s most populous nation, has killed hundreds in gun and bomb attacks this year.

This week, the U.S. embassy in Nigeria warned its citizens that the group might be planning attacks on the capital Abuja.

“We are building up our security infrastructure… I can say we are on top of this problem,” Jonathan told a joint news conference with German Chancellor Angela Merkel in Berlin after talks that focused on trade, energy and security issues. 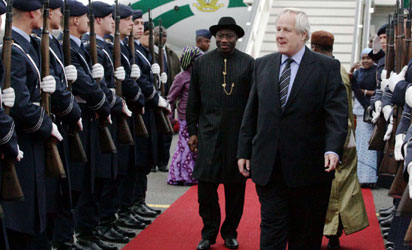 Asked what kind of assistance Germany could provide, he said: “In areas of training manpower and modern equipment… You need superior technology to fight terrorists and we think Germany and others can help us in such areas.”

Boko Haram usually targets police, authority figures and churches in the mostly Muslim north, although there have been a handful of deadly attacks in and around Abuja, which is home to ministries and foreign embassies.

Jonathan, who is a Christian from the southern, oil-producing Niger Delta, has been criticised by Nigerians and foreign diplomats for not curbing violence in the north.

The Nigerian government has dismissed the U.S. embassy warning of fresh attacks in Abuja, saying such statements created, “undue panic”.

RULE OF LAW
Boko Haram’s purported leader, Abubakar Shekau, has appeared in some al Qaeda-style videos on the Internet this year but has made only vague threats and no clear demands.

He has said his main objective is to spread Islamic law, free imprisoned members of his group and kill “infidels” who work against it, whether Christian or Muslim.

“I can assure the global community, especially investors from Germany, that the government is working very hard to bring this problem under control,” Jonathan said.

“Nigeria is still safe for investment. Nigeria is one country where… investment returns are quite high and where we believe in the rule of law.”

With 70 percent of its population below the age of 35, Nigeria offers a vibrant market for investors, he added.

Merkel said Germany stood ready to provide logistical and other support in the fight against Boko Haram. She also urged Jonathan to provide a better business climate in his country.

As well as Boko Haram and other security challenges such as piracy off its coast, Nigeria’s reputation among investors also suffers from rampant corruption, a patronage culture and dilapidated infrastructure.

Jonathan’s delegation to Berlin included business leaders and regional governors. Among deals signed was one with German engineering conglomerate Siemens on producing small and medium-sized turbines in Nigeria for the African market.