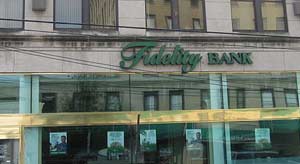 Mr. Obi is a graduate of Accountancy and holds a Master of Business Administration degree from the Lagos State University. He is a Fellow of the Institute of Chartered Accountants of Nigeria (ICAN) and a member of the Chartered Institute of Bankers of Nigeria (CIBN). Obi, who also until recently was the General Manager, Corporate Banking in the bank, was the pioneer Managing Director of Fidelity Pension Managers Limited (FPML), a subsidiary of Fidelity Bank. He had previously worked with the former Manny Bank and Union Bank amongst others, before joining Fidelity Bank in 2000. He has over 28 years industry experience and had served in various capacities in Corporate banking, Investment banking and the Public sector.

Mrs. Ugochukwu was General Manager, Legal Services and Company Secretary of the  bank. She holds an LLB (Hons.) degree from Obafemi Awolowo University, Ile-Ife and a BL from the Nigerian Law School. She also holds a Master of Business Administration degree from IESE, Barcelona, Spain. She is a member of the Institute of Chartered Secretaries and Administrators in Nigeria and has more than 21 years Industry experience. At various points, Mrs. Ugochukwu had been in Operations, Treasury management and Corporate Services functions. She is a regular speaker on Personal Financial Planning and Wealth Preservation.

Mr. Mohammed holds a Bachelor’s degree in Accountancy and Finance from  Nottingham Trent University, as well as a  Master of Science degree in Finance from the University of Lagos. A dealing member of the Nigerian Stock Exchange since 1992, Mohammed was an Executive Director with the former Oceanic Bank Plc. He was also a General Manager in the United Bank for Africa (UBA) and had been the General Manager & Chief Executive of Newdevco Finance Services Company Limited. He has over 24 years banking experience across business portfolios covering Retail, Corporate and Commercial banking.

Mr. Okonkwo holds a Bachelor of Science degree from the University of Benin and a Master of Business Administration degree, Banking and Finance from Enugu State University.

He is also a graduate of the Advanced Management Programme (AMP) from INSEAD, France. Until his appointment, Okonkwo was the head of the Corporate Banking Directorate in United Bank for Africa (UBA). Before then, he was at various times, the Managing Director & Chief Executive Officer of UBA, Ghana and the Regional Chief Executive Officer of all UBA subsidiaries in Ghana, Liberia and Sierra Leone. Okonkwo also worked with the former FSB International Bank and Guaranty Trust Bank (GTBank) and comes with over 21 years Industry experience  in various areas of banking, including Corporate and Investment banking, Consumer baking, as well Commercial banking.