The standards were adopted in the preparation of the bank’s 2012 first quarter unaudited accounts just submitted to The Nigerian Stock Exchange. 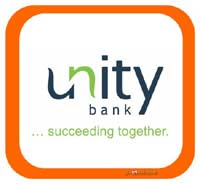 The IFRS are a set of internationally applicable accounting standards designed to make financial statements from different jurisdictions uniform and comparable. Nigerian banks and quoted companies are required to migrate to IFRS reporting effective January 1, 2012.

In its first quarter financial statements prepared in line with IFRS, Unity Bank Plc  declared a Profit Before Tax (PBT) of =N=2.3 billion as against a forecast of =N=1.6 billion earlier released to the Nigeria Stock Exchange.

This represents an annualized PBT of =N=9.2 billion compared to the =N=7.1 billion for the full year to December 2011 based on IFRS.

Consistent with its overall objective of significantly increasing its market share in a highly competitive industry, Unity Bank Plc also grew its balance sheet by 2% as shown in its 2012 first quarter results just released to the Nigeria Stock Exchange.

Customers’ continued and growing confidence in the brand is manifest in the growth in customer’s deposits from =N=266 billion at the end of 2011 to =N=271 billion as at March 31, 2012. Loans and advances grew from =N=121 billion to =N=145 billion within the same period representing 20% growth.

The bank’s impaired loans to total loans ratio also improved from 5.39% to 4.92% consistent regulatory requirement.  In a remark, the Managing Director of the bank, Ado Yakubu Wanka assured that the bank has put in place a number of new initiatives aimed at increasing efficiency for sustainable growth and profitability.