LAGOS-THE Lagos state government has disclosed why the bodies of the 149 dead victims removed from the crash site where the Dana Air aircraft from Abuja to Lagos on Sunday 3rd June  rammed into some building along Popoola Street in Iju-Ishaga area of the state , can not be  release bodies of crashed victims now

The state government said among other things, autopsies need to be carried out on the victims in order to clearly identify and match victims with sample of materials that will be taken from their relative so that confusion will be avoided when releasing the bodies to their owners. 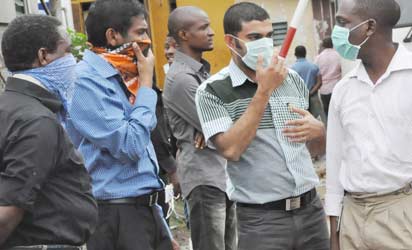 Speaking during a joint world press conference inside the Lagos State University Teaching Hospital in Ikeja, commissioner for justice and attorney general of the state, Mr. Ade Ipaye said DNA examination must be carried out on all the bodies before they are released.

According to him, the state decided to carry out the exercise in order to protect the interest of the victims and their families as well to keep the ensure that the charred remains of the victims are properly separated.

He said also that only 52 of the 149 victims have so far been identified after undergoing scientific examination at the LASUTH facilities while autopsy on others which are difficult to know their
true identity will be carried out in due course.

He said “52 bodies have so far brought into the facility here (LASUTH). The 52 being those that who were identifiable. Not all the bodies could be identified because of the manner in which they are
burnt make some of them unidentifiable.”

Mr. Ipaye said “97 charred remains were taken to the mainland hospital, this were bodies that without further scientific probe could not be identified. In all we have a total of 149 bodies at the moment”

He said “ as a state government, we are keeping custody of the bodies and making sure they are kept intact, we are also doing what we can to protect the interest of the victims and their relatives and part of that requires us to work with the airline and their insurance to make sure that the bodies are properly identified and they are marched to relatives whom they will be eventually released.”

The commissioner for justice appealed that while the process will take some time to complete, the public should be patience in the course of the process to enable the team complete their works properly.

Ipaye explained “ that is ongoing and this is the process we need to crave the indulgence of the public because by international standard, it is not enough to have the bodies identified by relatives, we need to do more and this is why the authority of LASUTH has been carrying out autopsies on the bodies and this is going to happen to all the bodies.”

He said so autopsy has been carried out on 30 out of the 52 identifiable bodies why the remaining ones will be completed today while the scientific exercise on the others will commence soon in
batches.

“the relatives need to bear with us because everyone is concern and want to have their dead bodies for burial but each victim both on the flight and on ground are entitle to compensation hence the whole process must be completed.”