LAGOS-Following the controversy surrounding the fatal crash of Dana Airline on Sunday killing all 153 persons on board the Accident Investigation Bureau (AIB) last night at 10:15 departed Nigeria for the United States of America with the flight data recorder and cockpit voice recorder for further investigations on the Dana Air plane disaster which have left a tale of controversy in its wake. 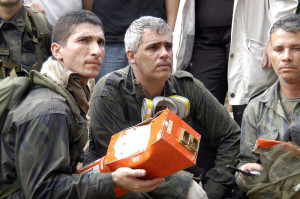 Through the black boxes, the causes of the air crash would be revealed while conversation between the pilots and the control tower would also be made known.

The Agency departed the Murtala Mohammed International Airport, Lagos to the U.S via Air France aircraft with the registration number AF 3051.

Briefing journalists at the departure hall of the terminal, the Director of Engineer, AIB, Engr. Emmanuel Dialla noted that the black boxes were overheated due to the crash, but assured that it would still be able to give enough information to wrap up the investigation.

He explained that although, the equipment were exposed to high temperature due to the heat, saying that the last 30 minutes of events in the aircraft could still be recovered.

He said, Some units can be surrogated, but we will do our best to ensure that the cause of the crash was revealed.