Tin Can Customs Rakes In N85Billion as Revenue

The Tin Can Island Command of the Nigeria Custom Service says it has generated a whooping N85, 180,533,598.00 as revenue into Federal Government coffers between January and May year 2012.

The Public Relations Officer of the command, Mr. Chris Osunkwo, told biztellers inLagos yesterday that the command which houses one of the largest vehicle importing terminals is expected to generate an average of N22billion monthly as revenue. 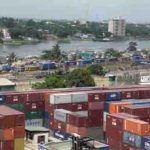 According to the command’s image maker, the command for the period under review has also made a number of seizures whose Duty Paid Value (DPV) is placed at N149, 008,800.0. These seizures include; twenty two 40footer containers, twelve 20footer containers and 1 unpacked vehicle.

Osunkwo also said that for each of the seizures made, the command has always arrested a suspect in connection with it but that all of them have been granted bail according to the law.

He said that the ear of abandoned seizure does not exist anymore at the command and that either the freight forwarder or his importers are usually arrested in connection with any wrong declaration or where there are discrepancies in declaration.

“There is nothing like abandoned seizure anymore, for any seizure we make arrest. We arrest either the agent or his principals, but because the law says we shouldn’t keep them longer than necessary, the one we cannot grant bail we take them to court and they get court bail”

He expressed optimism of the command meeting its revenue target for the year, saying that “the truth is that we are making serious efforts to actualize our targets, but there is nothing done by a human being that is perfect, so there are inconsistencies and imperfections here and there”

“We envisaged heating N110 between January and May this year but by the end of May we had N85.1, so at least we are trying and we hope to get there. We are supposed to make an average of 22b every month which translates into 264 for the year” he explained.