There was power outage at the Murtala Muhammed Airport Lagos that distrupt flight operation for several hours at the early hours of today.

The outage struck during the early hours of the morning as flights from 7:30 am through 8:45am were affected during the period. 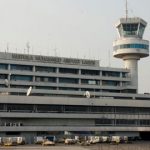 Flight like Aero Contractors, Chanchangi airline, FirstNation airline, were all affected due to the power outage.

One of the passengers who was affected, Mr. Babatunde Komolafe hinted Vanguard that his flight was delayed owning to power outage that struck the Murtal Muhammed Airport, Lagos.

Mr. Komolafe further affirmed that his flight was delayed for about thirty minutes as the aircraft they were onboard could not take off as a result of the power outage at the control tower.

He said”According to the pilot, the Control Tower is not working due to serious power problem. We have been in the aircraft for about 30 minutes waiting to take off”

When contacted the Public Relations Officer of Bi-Courtney, Mr. Steve Omolade debunked the claim stressing that there was no power outage at MMA2.

He further stressed that he had been in the office since 7:00am in the morning and he had not witnessed light out for the day.

He said”it is not true, we don’t have any light out, I have been in the office since 7:00am, we don’t have any Control Tower here, so how does it affect flight operations. Our work is to see to the up keep of the terminal building and we have been doing that perfectly”