Following the shabby way the search and rescue operations was carried out at the ill-fated Dana Air plane crash that killed all 153 passengers onboard at Iju-shaga area of Lagos Nigeria on June 3rd, 2012, President of Aviation Round Table (ART), Captain Dele Ore yesterday said that the rescue operations that was carried out by the government was a shame to the nation. 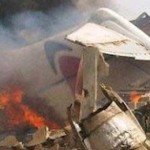 Captain Ore noted that if the lives of passengers onboard a plane that crashed should be save then the Local Government must be empowered to act as the First Respondant to help save the lives of the victims of the crash.

Captain Ore further noted that the victims of the crash could have been saved if there was emergency respond from the Local Government authority at Iju-Shaga stressing that some minutes after the crash some of the passengers onboard were still alive but later died due to the late arrival of the search and rescue operation team like NEMA and the rest.

He said”Until we reason together that the first responder to any emergency or accident wherever it occurs is the municipal of the Local Government authority’s emergency services, then we will continue to have difficulty in rescuing plane crash victims in this country”

“The First Responder cannot always be the State Emergency Services or NEMA that are located at Sate capital and Abuja. It makes no sense for victims of air crash at Iju-Shaga, Lisa or Obudu to continue waiting for some uncordinated rescue team from Alausa-Ikeja, Abeokuta or Calabar” Captain Ore added.

“So there is a lot that needs to be done if safety must be adhere to and if we are really ready to save the lives of Nigerian whenever there is a crash. Emergency services must be brought to all our local areas” he stressed.