Nigeria’s government said on Wednesday it had signed a N232.25 billion ($1.49 billion) contract with state-owned China Civil Engineering Construction Corp (CCECC) to build a railway between the commercial capital Lagos and Ibadan.

Lagos, the heartbeat of Africa’s second largest economy, is around 130 km south of Ibadan, Nigeria’s third largest city and a transit point between the coast and the north.

“(Cabinet) today approved the award of the Lagos-Ibadan standard gauge railway double track contract to CCECC in the sum of $1.487 billion … with a completion period of 36 months,” Minister of Transport Idris Umar told reporters.

Umar gave no details on where the funds would be found to pay for the project. 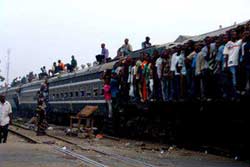 Ethiopia signed a deal with CCECC in December last year to build the final section of a railway line that will link its capital Addis Ababa to the tiny Red Sea state of Djibouti.

Nigeria, Africa’s most populous nation, is overly reliant on its 2 million barrel crude oil export business and massive investment is needed in infrastructure, including transport and power, to help diversify its economy and alleviate poverty.

But corruption and mismanagement mean many projects never see the light of day or run well behind schedule and over budget.