The newly appointed Managing Director for the Nigerian Ports Authority, Mr. Habib Abdullahi has officially taken over the reins of the organization’s affairs today at the Marina headquarters in Lagos even as he has expressed his fears over the enormity of the task ahead of him. 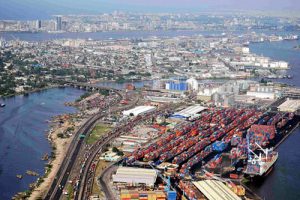 Abdullahi who until now was the Executive Director Finance and Administration of NPA has however assured that the challenges are not unachievable and that he is going to improve on the legacies that has so far been laid down by his former boss, Eng Omar Suleiman.

Speaking at a brief handing over ceremony to usher him in as the new helmsman, Habib said that this is not the first time he will be taking over duties directly from Eng. Suleiman, he explained that he had taken over from the outgoing MD in London and that it was pretty difficult to fit in his shoes then.

“Not all of you may understand the feeling that I have, a feeling of gratitude to God and a feeling of fear because of the responsibility that God has bestowed on me, I have worked closely with Eng. Omar Suleiman, he has been a friend, a brother and a boss, this is not the first time I am taking over from him, I did so in London and I know what he left there and I know how difficult it was for me to fit in what he left” Abdullahi said.

Abdullahi commended Eng. Suleiman for how he has been able to pilot the affairs of the organization saying that he has been the most humble, easy going and most friendly managing director that the NPA as ever had.

He appealed for the cooperation and support of the management and staff of NPA as they have extended to Eng. Suleiman in the past.

Speaking earlier in his handing over speech, former Managing Director Eng. Omar Suleiman charged the new NPA boss to be conscious of the enormity of the responsibility thrust upon him and that he must ensure that he remains alert to these duties.

Suleiman said that NPA being a complex and unique organization requires tact, wisdom and the cooperation of the entire management team in order be able to successfully fulfill its responsibilities.

“In all issues that require taking decisions, I urge you to be steadfast, united and be guided by the highest consideration for the nation, the industry, the organization and its staff”

While appreciating the contributions of maritime industry stakeholders throughout his stay at the NPA, Eng. Suleiman acknowledged that “there will definitely be situations where i offended others and some have offended me, i have forgiven all and seek the forgiveness of everybody i have come across in my career in NPA” he said.