Experts raise alarm over death of domestic airlines in Nigeria

Aviation experts Sunday raised an alarm on the possible death of all domestic airlines operating in the country in the next five years if adequate measure was not put in place by the Federal Government to salvage the situation.

This warning is coming barely when two vibrant domestic airlines have gone into oblivion, the suspension of Dana airline due to the ill-fated plane crash that Killed all 153 passengers onboard its aircraft, the McDonnell Douglas 83, MD 83 that crashed at the Iju-Shaga area of Lagos and Air Nigeria which is currently grounded by the Nigerian Civil Aviation Authority (NCAA) due to financial distress of the airline. 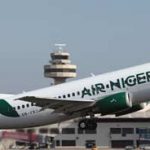 Other airlines like Chanchangi airline and FirstNation airline have all suspended their operations as their aircraft had been taken for maintenance abroad.

At the moment there are only three schedule commercial airlines operating in the country, IRS airline, Arik airline and Aero Contractors airline whose capacity put together have not been be able to adequately provide sufficient air transportation to the Nigerian travelling public.

Contrary to the fact that there are about 19 to 22 airlines operating in the country according to the records of the Nigerian Civil Aviation Authority (NCAA), investigation conducted by Biztellers reveals that almost all the airlines have gone into extinction leaving only three schedule commercial airline operators which are IRS airline, Aero Contractors and Arik Air while others include Overland Airways, Associated airlines, Bristow Helicopters, OAS, Caverton amongst a few other thus making it inadequate to meet up with the growing demand of air travel in the country.

Speaking on the possibility of the Nigerian aviation industry loosing all its airline if the Federal Government fails to save the situation, President of Nigerian Aviation Safety Initiative (NASI), Captain Dung Pam have said that if care was not taken that Nigeria would not have any indigenous airline whether a regional or domestic carrier flying in the country’s airspace in the next five years.

Disclosing this development to newsmen during an interactive session in his office in Lagos, Captain Pam said”I guarantee you that we will not have any airlines in the next five years”

“All the ones that we have now will go but you know what, they will be replaced and the replacement may not even be an African carrier, I don’t know how many of you is following what is happening now, as you know Telus, the former Chairman of Easy Jet and Robica group are planning to invest about US$500million to start up a low cost carrier based in Accra, Ghana” he said.

Captain Pam further stressed that when this happens all the traffic emanating from the Nigerian aviation industry would be shifted to Ghana thus leaving Nigeria at the receiving end.

He said”As you know Nigeria is at the moment 18 percent of the population of the whole of Africa, we are 47 percent of the population of the whole of West Africa, we provide 65 percent of all the traffic in West Africa now non of our airlines are proven that they are making profit, non not one and that is why I said four days ago and I said final advice to the aviation industry in Nigeria, to the operators consolidate the airlines or die and to the government support, structure or loose strategic control of the industry and that is happening gradually one after the other”

He further pointed out that the only solution for the survival of Nigerian airlines was for them to merge together to become a formidable airline that can compete favourably with other airlines in the world while the government should support the airlines to survive.

Corroborating Captain Dung Pam, The President, Sabre Networks and Former Executive Director, Belleview Airlines, Mr. Gbenga Olowo stressed that the government should be asking the question why are all our airlines dying adding that there could be political under tone to why all these airlines have gone into oblivion.

“If Okada airline will die, if Kabo will die and EAS died, if Bellview of so many years will died and so on, what is Nigeria and its government doing, Is it that all the investors are crazy people, Is it because they are Nigerian, we should be asking the question as a mother why are my children dying. Then we used to hear that there was no political will and you can burn all your money and Okada airlines and others failed with its Boeing 747 that was rousing away at the tarmac because there was no political will. I think we should really ask the government why are our domestic airline dying” he asked.

Mr. Olowo however noted that for sanity to prevail in the aviation industry, the Federal Government must be ready to force all local airlines operating in the country to consolidate into four formidable airlines that can favourably compete with other airlines in the world.

He said”I want to see a Nigeria with four private airlines, very strong ones, for example if you add up all the 22 aircraft in NCAA’s record in the country now, it is less than the fleet of EasyJet or JetUs, these are small airlines operators in Europe and in the USA, some of them have 100 pieces of aeroplanes which ranges 100million dollars”