In other to abate incidences of pilferage and damage of vehicles within its premises, terminal operator, Five Star Logistics Terminal as one of the leading vehicle handling terminal in Lagos has stepped up security on examination of vehicles.

The terminal has also instructed that henceforth, freight forwarders and importers coming for their examination must be escorted by a security guard and they must obtain a ‘vehicle examination sheet’ from the security post before examination. 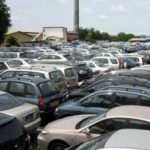 Also speaking with our correspondent on the development, the 5star Logistics Director of Planning and Research, Mr. Chuks Okereafor explained the company has been paying claims to importers due to inceasant vandalisation of their imported vehicles within the terminal.

According to him, in order to have a genuine claim, the examination sheet must me attached to the letter of claims by the agent and should be submitted to the claims manager, he insisted that claims will be rejected if a claimant refuse to attach the form to their claims letter.

Okereafor also explained that “examination of vehicles in the terminal is now being regulated and that only one person at a time is allowed to come for examination of each vehicle. According to him, the terminal is trying to put stricter measures in place to deter people that have no business coming into the port.

“Before now, vehicle examination in terminal was not being regulated, you can have a cluster of three to ten people on one vehicle bt now it is no longer so, we also trying to put some other procedures in place to ensure that people do not have access to the terminal all in the name of examination”

“People want to gain access into the port even when they dont have any business there, here we are highly vulnerable unlike the container terminals” Okereafor pointed out.

“We are trying to make more laws to check people coming into our terminal” he maintained.